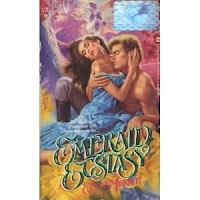 You know you have a keeper when your emotions are engaged from the beginning and you can’t put it down. EMERALD ECSTASY is just such a story. It begins in Ireland, where most of the story occurs, and ends in the new Republic of Texas. The heroine is an American but the hero is all Irish hunk. This is one you will want to buy new if you can as I expect you’ll want to read it again and again.

In the spring of 1833, Marguerite LeFleur left New Orleans, her family plantation and the hurtful rumors spread by her wheelchair-bound friend (who believed Marguerite was having an affair with her husband), to go to Ireland where Marguerite’s mother moved upon marrying a British government agent, Earl Taylor. Taylor had put down an Irish rebellion (brutally, killing without cause), and as a result, was given the O’Roarke lands by the Crown. He is hated by the Irish and plagued by their hero, Sheridan O’Roarke, the surviving male of the O’Roarke family. Before Marguerite even sees her mother, she encounters the dashing Sheridan, who means to have her if only to thwart Taylor’s plans to take the wealthy heiress as his mistress.

Sheridan is a noble hero who loves Ireland and the Irish cause but tragedy and others’ evil actions have caused him to compromise his honor to become an outlaw seeking only revenge. Marguerite is a courageous, kind and morally upright young woman who has been the victim of lies told to manipulate her into Taylor’s evil hands, and though she loves Sheridan, she is now the victim of his lust and revenge. When it seems love is lost, she leaves Ireland for Texas to start a new life…

This is a story of Ireland and all that the Irish suffered at English hands. But it is also a story of how love can creep up on a person and hold him in its grip so that time and distance cannot dull the passion. You will love how Merritt weaves a complex, well-told tale to draw you in. I highly recommend it.
Posted by Regan Walker at 9:35 AM