The latest from new Western historical romance author O’Connell is a keeper just like her others so far (EYES OF SILVER, EYES OF GOLD and SING MY NAME).

Set in Arizona Territory and Northern Mexico in 1881 (late in the time of the Apache wars), this one tells the story of Katherine Grant, who on her way home to New York, is saved from stagecoach bandits by a band of Chiricahua Apache. ("I jumped from the frying pan into the fire. Before long I'll be dancing on the coals.") The bandits were the frying pan; the handsome young Apache who spoke English and saved her from them was the fire; and the coals were Gaetan, the Chiricahua brave who hated all whites and Mexicans for what they did to “the people.” He wanted her dead. But Gaetan promised his dying brother that he would care for the white woman, so he had no choice but to take her with him.

I absolutely loved Katherine. She was funny, courageous and an independent thinker. No whimpering, reticent female here. Raised on ships sailing the world with her father and 5 brothers, she is a hellion who became a lady but never gave up her love of adventure and her willingness to take on any challenge. And she has lots of them following the Apache warrior, Gaetan. I was on the edge of my seat with outlaw, renegade Apache, Mexican soldier and miner attacks. As Katherine and Gaetan’s relationship developed, O’Connell made me really care about what happened to them. My heart was committed to seeing them end up happy and together (thankfully this is romance and so you know you’ll see that in the end!). It’s an absorbing story I did not want to put down. 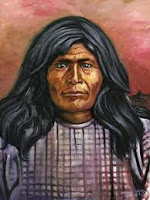 O’Connell said her story was inspired by the “very strong and very masculine” face of the Apache chief Victorio (pictured), who fought for his people in the late 1800s. She does a superb job of portraying the Apache way of life and the impossible situation they faced, wedged between the Mexicans who wanted to annihilate them and the Americans who wanted to imprison them on reservations where they became “the dead.” And in the middle of all that were the two lovers who came together from different worlds, and though unlikely, were absolutely perfect for each other.

You won’t be disappointed in this one!
Posted by Regan Walker at 7:51 PM