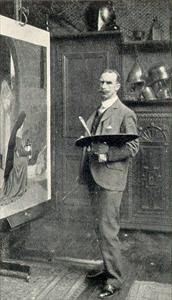 During the time I’ll be featuring Medieval romances on my blog and for my Best Medieval Romances list to be posted in October, you will see several paintings by Blair Leighton. Thus, it seemed only fitting that I should tell you more about this artist who gave us such beautiful renderings of medieval love.

To this day, very little has been published about Blair Leighton: there are no modern monographs dedicated to his work, and he is seldom mentioned in books which discuss Victorian art, and yet some of his paintings number amongst the most recognizable of Victorian art to many people and have garnered large prices at auction in recent years. You could say Leighton inherited his gift from his father, Charles Blair Leighton, who was a very talented artist, and exhibited several works during his short career (he died when he was only thirty-two years of age.)

Blair Leighton's works of Godspeed (1900) and The Accolade (1901), pictured here, can be seen in almost every poster shop around the world and are used as the epitome of medieval iconography. If one looks at the visual elements in Godspeed, for example, it becomes evident that very few paintings encapsulate with such a strong a sense, the sensibilities of this genre. 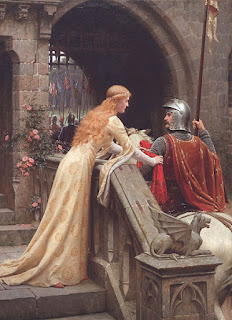 In Godspeed, the beautiful maiden on the steps of a stone castle, the knight in shining armor, the white steed, and the sense of immediate peril which threatens the subjects’ contentment almost define our modern day conception of Medieval legend and romantic sentiment.


The Accolade (pictured below) derived its inspiration from a French work on chivalry, which mentioned that even ladies occasionally conferred the order of knighthood on worthy men. 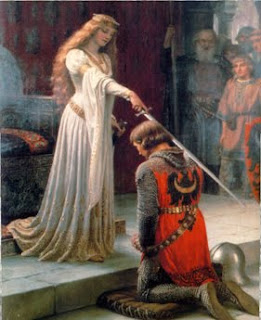 Though Blair Leighton was forced by his family into a mercantile career, the artistic impulse in his heart refused to be denied. He spent all of his spare time in drawing, and made such progress that when he was seventeen he decided to devote his evenings after business hours to the study of art. When he turned twenty-one, he announced to his family that, cost what it might, he would be a painter. To that end he had been saving all he could out of his salary, and managed to put by enough to provide a good year’s start. He resolved first to get into the Royal Academy Schools. So, he went to the British Museum, did the necessary drawings as examples of his skill, and was soon admitted as a student.

To meet his expenses, he began to sell his illustrations, which drew comparatively high prices. The reason for his rapid success was perhaps to be found in the fact that he treated each drawing as if it were a picture, not only paying models to sit for him, but even going to the expense of hiring the right costumes. About eighteen months after he had entered the Royal Academy Schools, he sent his first picture to the Royal Academy Exhibition. The critic of the Standard at that time (1877) expressed the hope that the artist would not be demoralized by being elected a Member of the Academy too soon, but would be kept waiting for a time till he had done some more good work.

Although Blair Leighton was elected to the Royal Institute of Oil Painters in 1887, he was never voted in as an associate of the Royal Academy. His career hit its peak in and around 1900 with his most famous works of Godspeed being in 1900, The Accolade, 1901, The End of the Song, 1902, Alian Chartier, 1903, and Vox Populi, 1904. He continued to paint other great masterpieces for many years, with less and less large-scale works as he neared the end of his life. He died on September 1st, 1922. Thankfully, we have his legacy today...beautiful works of art.