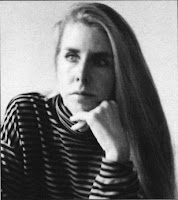 Jennifer Horsman is an award-winning author of nine historical romance novels, as well as non-fiction books, six successful screenplays, two plays, and as she says, “countless angry letters to the editor of the LA and NY Times,” all “more or less” to her credit.

Born and raised in San Francisco, she moved south to finish college at the University of California at Irvine. Here she fell instantly and madly in love with one of her professors, who she says she “finally convinced” to marry her.

After graduation, while trying to decide what to do with her life, she saw this statement: “Half of all novels sold in our country are romance novels.” So, she rushed out to buy “a pile of them.” While she says she was “flabbergasted that someone thought to put women's sexual fantasies on paper,” she knew she could write one. Her first novel, published in 1983, was PASSION FLOWER, an 18th century novel set in Jamaica and the colony of Virginia (reviewed on my blog this week). That led to more novels.

Like me, Horsman was also a reviewer of books (but unlike me, she got paid by Publisher’s Weekly for doing it!). She recalls that being the last person hired, she kept getting long novels about “stunningly boring family dramas or novels set in British boarding schools where the characters were involved in a lot of spanking and occasionally found unconventional uses for ropes (gasp).” She found it hard to write the reviews with a straight face. The editor kept sending her angry notes, “Jennifer, keep your personality out of the review!” She quit when sheer perseverance led to a promotion and she was offered the position reviewing romance novels.

Despite her success as an author (to which I can attest as I have loved her books!), she stopped being able to write romances when she began having “increasingly vivid fantasies” of killing off her heroines in “really dreadful ways.” It was then she turned to writing screenplays, which she loves. She also wrote a non-fiction book, Please Don't Eat the Animals: All the Reasons You Need to Be a Vegetarian, which “morphed” into another, The Vegetarian Weight Loss Diet. She candidly claims to be “one of those nutty animal rights people.” You can tell she loves animals from her historical romances where she frequently features wonderful animal characters. I can tell she’s a dog person, as am I.

While she is no longer writing historical romance, thankfully she is bringing her backlist to eBooks and until the whole list is available for eReaders, you can obtain the rest used from Amazon. I have them all and love them. Anyone who is a member of my blog has seen my reviews of her books, which also appear on my Best Lists. I highly recommend them all.

This week my blog will feature reviews of many of her novels. Here’s the list: