Hello, Margaret. Thanks for joining me today. I just reviewed your WWI historical romance, A Rose in No-Man’s Land, and thoroughly enjoyed it. I wanted to learn more about you so I’m so glad you accepted my invitation to be my guest!

And, let me note that Margaret is gifting from Wild Rose Press one copy of her novel to one lucky commenter. While it was still unpublished, it won an award for the best unpublished manuscript in a literary competition in Australia. You won’t be sorry you read this one! (Leave your email or send it to me if you comment and want to be included.)

1. Tell us a little about yourself and what led you to write historical romance?

I live in Australia and I have always been interested in our history. My ancestors came to Australia from England, Scotland and Ireland. They were pioneers who fought a savage land and prospered, despite having to overcome incredible hardship.

As for romance, I have always been a sucker for the happily ever after endings that always happen in romances. I started off reading Mills & Boon, and graduated to romances with a little more bite to them. I like tortured heroes who put up a fight, but eventually succumb to the heroine, and for historicals in particular, this is a perfect scenario.

I started writing as a child, mainly sad little ditties. Then I graduated to short stories, and I actually won a few writing competitions. In my late teens I started reading romance novels, and after I was married and home with my 3 sons, my hubby worked shift works, so I often had plenty of time on my hands. So, I started writing novels. I would have to say I have been writing romance novels for fun for about 25 years, I got serious and started submitting to publishers about 10 years ago. My first novel was published in 2006.

2. I understand World War I is your favorite period in which to set a story. Why is that?

My family has a proud military record in both world wars, but like many Australians the Great War, as World War I was known, cost us dearly, three relatives were killed in action, several others were wounded.

When the 1st World War started, Australia had a population of less than four million, yet we sent over three hundred thousand soldiers overseas to fight, over sixty thousand were killed and more than twice that number were wounded. Some small country towns became ghost towns because so many of their young men had been killed. I wanted them to receive the recognition they deserved. I also wanted to include the brave women who waited at home, sometimes in vain, for their loved ones to return. 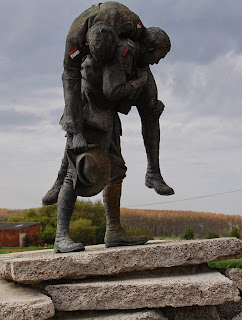 The monument pictured on the left is from a French battlefield on the Somme called Fromelles.The statue is called "Cobbers," an Aussie expression of the day for friend or buddy. Fromelles was one of the most costly, most deadly battles of the war for Australia. We had 5,000 casualties in just a matter of a couple of days.

3. I could tell from my reading of A Rose in No-Man’s Land that you had done a considerable amount of research. Tell us about that.

I have visited the battlefields on Gallipoli (in Turkey), and in France and Belgium. I also had access to letters and diaries from relatives, and I trawled through history books in the library. The soldiers in the trenches called the army nurses who treated their wounds “the roses of no-man’s land,” and as the heroine in this story is a battlefield nurse, I thought the title was appropriate.

4. What are you writing now? Any new directions for you?

I am glad you asked. Now this is hot off the press, so to speak. I am writing a Western romance, The Gunslinger's Angel, as of a couple of weeks ago. I was invited to join a group of Western romance authors and was asked to write a short story for an anthology they are planning. As I used to watch and love all the Westerns on TV, I thought I would give it a go. Yesterday, I finished my first draft, and I have to say, I am quite happy with it. Needs more work, of course, but the skeleton of the story is there.

5. Have you traveled much? To the US? Where in the world would you like to go, and would it be research for one of your future novels?

I have visited the UK four times as I have a son living over there; a great jump-off place for France and Belgium. I have been to New York and Las Vegas in the US, and I would like to go back and see San Francisco and perhaps see the American west, purely for enjoyment.

6. What do you do in your down time? For vacation?

I like catching up with friends and family. I do like to get out in my garden. Shopping is good.

7. What are you reading? What are some of your favorite historical romances?

I have just finished reading and enjoying several historical romances: Blind Acceptance and its sequel Blind Achievement by Western romance author Susan Horsnell. The Partisan’s Wife, Destined To Love, and Time Invested, are three other great books I have recently read. 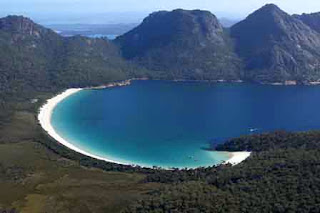 8. I have had the pleasure of seeing some of your beautiful country and have friends in Sydney. Is there a favorite place for you in Australia?

Ah Sydney, I have been there a few times, it is only about an hour away from me by plane. I think I would have to say Tasmania [pictured above] is my favourite destination in Australia.

I can sure see why you like to visit Tasmania! And on my Exotic Locales Best List, there's at least one historical romance set there.

Thanks for being my guest, Margaret, and letting my followers know more about you and the story behind your wonderful novels! If you ever get to San Diego, or one of the romance author conferences in the US, do let me know!