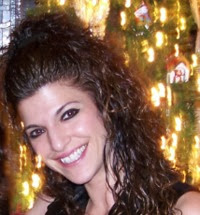 My guest today is Violetta Rand, author of Viking novels Blind Allegiance and Blind Mercy, who will be giving away her first novel, Blind Allegiance to one lucky commenter (so leave your email or send it to me!). I asked Violetta to tell us what she loves about Vikings and what inspired her latest story.

Why I Love Vikings by Violetta Rand

Many things attracted me to Vikings. I’ve been in love with history forever. As a highly imaginative child, prone to telling tall tales, reading and writing came naturally. Of course what I read and wrote is another story. It started with sneaking peeks at my eldest brother’s collection of Conan the Barbarian comic books and developed into a full blown obsession with heroes. What’s more compelling than a warrior’s tale? Combine romance, action, and a touch of mysticism and I’m hooked—in a big way.

Lacking any central authority during the early raids, Norsemen seized this opportunity and often returned from pillaging in glory and wealthier than they ever dreamed. Commoners became princes, men of reputation and honor. That’s where I draw inspiration. All Vikings sought one common end—a seat at Odin’s table in Valhalla. 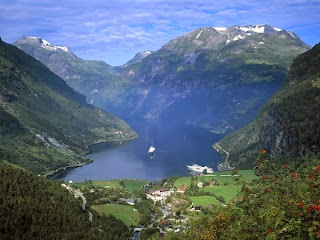 Imagining the glories of Asgard, the heavenly realm where Odin and his children lived, made it easy to develop my latest hero, Tyr Sigurdsson (Blind Mercy). Tyr might appear the typical Alpha at first glance, but he’s not. Born in Scotland, he chooses to return to his Norse roots and follow in his father’s footsteps. Life would have been so much easier in Scotland.

Tyr differs greatly from his siblings. He’s not a Christian. Odin speaks to his heart; and so does the temptation to be a true warrior.

Blind Mercy offers a glimpse into the turbulent life of a Viking who gives his heart to a woman he’s not supposed to love. It opens up at the Battle of Stamford Bridge (September 1066), the moment some scholars consider the end of the Viking age. However, it’s widely accepted that this battle simply forced the Vikings to reinvent themselves. Two of my favorite historians (Somerville and McDonald) say it best: It might be more useful to think in terms of several Viking Ages rather than a single Viking Age. They base this observation on Scandinavian roots and history, where the Vikings settled and how their culture took hold in different countries. 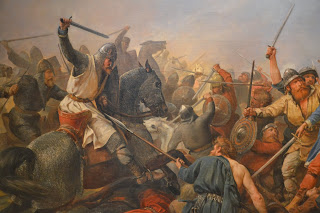 Here’s a quick overview of the Battle of Stamford Bridge (from Britain Express):

When Edward the Confessor died he left no direct heir, and the throne of England passed to Harold of Wessex. Harold's brother Tostig influenced the legendary Viking warrior, King Harald Hardrada of Norway to invade England.

While a second claimant to the throne of England, William of Normandy, labored to launch his own invasion fleet, the Norwegians sailed by way of the Orkneys and landed at Riccall, near York with a force probably numbering 10,000 men. Harold had been well aware of the dual threats to his new kingdom, and he called out his levies. These were free men from the shires who owed two months of military service each year. By September the two months were up and rations were low, so Harold reluctantly released these irregular troops. This left him with a trained force of about 3,000 mounted infantry known as house-carls. When the news came of the Norwegian landing, Harold quickly marched his men north by the old Roman road known as Watling Street.

The Earls of Northumbria and Mercia, Morcar, and Edwin, advanced their men from York and met Harald Hardrada at Fulford on September 20. The experienced Norwegian commander completely routed the earls, depriving King Harold of valuable allies for the fatal battle with the Normans which lay ahead.

The Norsemen appointed Stamford Bridge as a meeting place for an exchange of hostages with the city of York. The confident victors of Fulford were relaxing in the meadows surrounding this crossroads 12 miles from York when to their shock they saw a fresh Saxon army streaming up from the South.

Well, perhaps "fresh" is too strong a word, for Harold had just pushed his men an amazing 180 miles in 4 days, and they were doubtless exhausted. The Norsemen were caught completely off-guard; most had discarded their mail shirts and helmets in the hot sun. They were soon to pay for their carelessness. 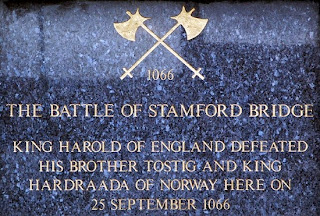 Unfortunately, this war cost the Norwegians dearly. With their sovereign dead, command of Norway was split between his two sons, Magnus and Olaf. But I’ll save that for another tale!

You can keep up with Violetta and her Vikings on her new website HERE. 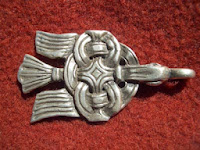