Today I am welcoming the writing team of Fela Dawson-Scott and Patricia McAllister, better known as Brit Darby, to my blog. As you all know, both in my own romances and those I read for reviews, I love the deep historicals, the ones where history is a character. Well, Brit Darby is just such a writing team, as you’ll see from my review of Emerald Prince posted just before this guest post. I am very excited to have them on my blog!

Thank you, Regan, for the invitation to share some history with your readers for Irish Historical Romances month on your blog.

When Brit Darby (the writing team of Fela Dawson Scott and Patricia McAllister) set out to write Emerald Prince, we were firmly set upon one premise: There must be real history and genuine historical figures in the book. The challenge was how to weave real people into our fictional tale, and blend it all together as seamlessly as possible.

Once we decided upon a time period and setting for Emerald Prince, we set about our research and gathering the cast of characters. In 1209, when the main book opens, King John ruled England. Our heroine, Lady Alianor Coventry, is a young widow who is subject to his games and whims at court. One of these whims involves packing Alianor off to marry a Norman lord in Ireland.

King John was Lord of Ireland throughout his entire reign. Conflict raged in Ireland between the Anglo-Norman lords and indigenous Irish kings. John manipulated both groups to tighten his grip on Ireland. Using Alianor as a pawn to placate a powerful Norman was perfectly in his character.


Once we had our English heroine en route to her unhappy fate, we needed the perfect Irish hero to rescue her, though inadvertently in this case. Enter Liam Caomhánach, who initially kidnaps Alianor for ransom, but quickly finds events (and his feelings for the lovely young widow) spiraling out of control. Liam is, of course, the “Emerald Prince” behind our book’s title. But how he came to life is a history lesson in itself.

Researching early Irish kingdoms was an eye-opening experience. For example, the Gaelic word for “king” (rí) doesn’t mean what we might assume today. Instead of a single, all-powerful monarch (like King John), the term king in early Ireland could mean a leader of any group. And a local Irish “king” could be subject to another “king” in the next valley, who in turn was vassal to another “king”, who perhaps oversaw an entire province. There were many such kingdoms dotted across the Emerald Isle. 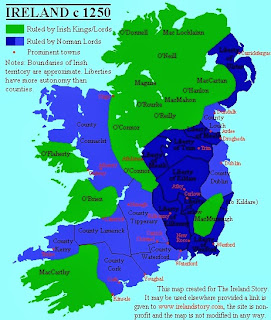 To complicate matters more, Irish kingships were not passed down in the usual way. It’s assumed that kings inherit crowns from their fathers. This is traditionally the case in continental Europe. However, Irish kingship did not follow a strict father to son (or closest male relative) succession. Instead, it was based on blood kinship and could stretch over several generations.

This meant that grandsons and great-grandsons, even illegitimate sons, could come to power and rule, if they could drum up enough support from relatives and political allies. You can see how this resulted in some intense competition for crowns (family reunions must have been fun!)

All these historical tidbits helped us form an interesting premise: What if our hero was the illegitimate son of one of these Irish kings? What if our hero’s mere existence was a threat to the other potential heirs, because of the unconventional way Irish kingship was conveyed? Thus our hero Liam was born. His father, Cathal Crovderg (O’Connor), was a real king of Connacht and a genuine character to boot. He plays a significant role in Emerald Prince. But Liam uses his mother’s surname, partly out of defiance, partly out of pride. He refuses his father’s attempts to rein him in. Instead, he assumes an outlaw lifestyle and gradually attracts followers across Connacht, who join him at Wolf Haven, a mountain hideaway tucked away amidst abbey ruins.


Liam’s actions attract King John’s attention, but not in a good way. Indeed, they put his father Cathal, who is subject to John’s rule like most Irish kings of the day, in a precarious position. Should Cathal be loyal to his liege, or his son?

Enter another complication with Quintin de Lacy, the Norman lord who is obsessed with Alianor and bargained with King John to get her as his bride. De Lacy is furious when she is snatched away from him. Before Liam knows it, he has bitten off more than he can chew, invoking the ire of several powerful men, including his own father.

Events are also overshadowed by an ancient legend, one that says a man known as the Emerald Prince will rise to unite Connacht, and restore peace to the war-torn land. Liam refuses to believe he is this prince—he counts himself an ordinary man who only breaks laws to stay alive. But Liam’s loyal followers believe in the legend with all their hearts.

King John is acknowledged by most modern day historians to be a rather terrible fellow. As is the case with most medieval queens, however, much less is known about his wife, Queen Isabella. We went with our instincts in rounding out Isabella’s personality and actions. In Emerald Prince, the queen turns out to be a bit of a heroine herself, working behind the scenes to aid the cause of true love.

Other real historical figures pop up in the book, including William Marshal. All play a role in uniting our hero and heroine, and help fulfill the legend of the Emerald Prince. Connacht’s people find they are ready to throw off the past cloak of servitude, and let the light of freedom guide their future.

From today until St. Patrick’s Day, Emerald Prince is on a special Kindle discount deal. And, as a special treat, leave a comment here for a chance to win a $20 Amazon gift certificate.

Regan's note: You can keep up with Brit Darby on Patricia's and Fela's website: britdarby.com