Many of us Regency authors and readers know that Napoleon’s wife, the Empress Josephine contributed to establishing the slim, high-waisted, chemise dress as the dominant fashion in Regency England, but did you know that Josephine is also known for her passionate love of roses?

Marie Josèphe Rose Tascher de la Pagerie in 1763 on the Caribbean island of Martinique where her family owned a sugar plantation. The island is a lush, tropical paradise with beautiful flowering plants. Perhaps it was there she first developed a love for colorful, sweet-smelling blossoms and exotic plants, for she was to introduce many to France.

After she married Napoleon and became Empress of France, Josephine spent vast sums of money collecting new varieties of plants, including roses, from all over the world for her garden at Chateau Malmaison outside of Paris. Napoleon complained about the expense but he was off fighting the British in various places, so Josephine pursued her love of roses and expanded her garden.

Napoleon turned a blind eye when Josephine broke the law by asking that English seeds and plants be brought to her from captured ships. Her informal plantings had already been christened jardins à l’anglaise (English Gardens) and her greenhouses were modeled on those at Kew Gardens near London.

The fact that France was at war with England did not stop her from looking for new roses in the backyard of the enemy. At the height of the war in the early 1800's, Napoleon sent money to England to pay for his wife's rose plant bills. And the British Admiralty allowed ships to pass through its naval blockade to deliver those roses to Malmaison. War could wait while the rose deliveries continued. She even obtained a passport for a London nurseryman to travel back and forth with her new plants.

During the period 1805-1810, she collected 260 roses for her garden. But she did more than plant a beautiful rose garden. She influenced the growing of roses. The roses at that time bloomed once a season, and their blossoms faded quickly once a flower was cut. By systematically hybridizing the western rose with varieties from China, where the rose first developed, Josephine re-structured the way roses developed their petals. The result was a rose that blossomed several times a season, and looked splendid in a vase in the parlor for days.

Josephine elevated the stature of the rose by commissioning artist Pierre-Joseph Redoute, a former court painter of Marie Antoinette, to paint a series of rose portraits. Blush Noisette (pictured below) is considered by many to be the all time masterpiece of botanical illustration. 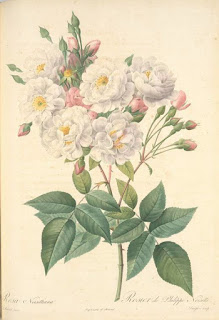 After Josephine died in 1814, Redoute published his rose portraits in three volumes simply titled Les Roses (1817-24), dedicated to Josephine’s memory. The book has continuously been in publication ever since.

In Racing with the Wind, the first book in my Agents of the Crown trilogy, much of which is set in Paris, Lady Mary, escapes a heated ballroom into a garden where she encounters the mysterious Lord Ormond who tells her of Josephine’s passion for roses: 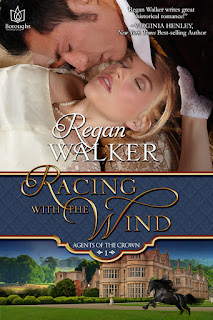 Racing with the Wind:

The intrepid daughter of an earl leaves Regency London for the Parisian court of Louis XVIII, where she finds adventure, mystery, and above all, love.

Hugh, Lord Ormond, had been warned. Prinny had dubbed Lady Mary Campbell “the Swan,” but no ordinary man could clip her wings. She was a bluestocking hoyden, an ill-advised match by every account. Luckily, he sought no bride. His work lay on the continent, where he’d become legend by stealing war secrets from Boney. And yet, his memories of Lady Mary riding her black stallion were a thorn in his mind. He was the son of a duke and in the service of the Prince Regent…and he would not be whole until he had won her hand.

It was unheard of for a Regency debutante to postpone her first season, yet Lady Mary had done just that. Far more interested in politics than a husband, she had no time for foolishness or frippery. Already she had assisted her statesman uncle in Paris, and she swore to return to the court of Louis XVIII no matter the danger. Like her black stallion, Midnight, she would always run free. Only the truest heart would race beside her.

Buy on Amazon.
Posted by Regan Walker at 3:30 AM