Of Cabbages and Kings: Medieval Gardens by Regan Walker

Such a garden, even in those times, would have been a mainstay of medieval life. While we might think of them as vegetable gardens, herbs were also grown for medicine. And flowers were important, too, both as a food and as medicine.

Even before the Normans, England had gardens on larger manor estates that were acres in size. If the garden was large, it might have fruit trees and bushes, such as apple, plum, pear, cherry, mulberry, gooseberry, even strawberries and grapes, depending on the local climate.

In about 800 AD, Charlemagne issued the Capitulare de Villis Imperialibis, a plan delineating the plants that would ideally be included in estate and monastery gardens throughout his empire. The Capitulare contains the names of some 89 plants of which at least 73 were used for medicinal purposes.

Abbot Benedict is known to have exchanged plants with Alcuin of York, one of Charlemagne’s most trusted advisors. At the time, Alcuin was Abbot of Tours (796-804 AD), where he was famous for his roses and lilies.

What kind of plants did they grow?

There would have been herbs and spices for cooking, such as parsley, sage, chives, dill, marjoram and cumin. There were herbs for medicinal purposes, too, such as betony and chamomile (for headaches), anise and chamomile (for flatulence), chickweed (for constipation, upset stomach and for colds), wormwood, mint and balm (for stomach ailments), St. John’s Wort (for fever) and nettle (in a salve for joint pain).

Some medieval vegetables were considered field crops, including peas, lentils, fava or horse beans, and turnip. Besides edible roots, leaves from many of these plants were also used as pottage greens in soups or stews. Pottage was a basic staple of medieval life and closely resembled the stews of today.

Pottage plants were found both in the garden and in the wild. Some of these plants included agrimony, betony, borage, chives, dandelion and violets. 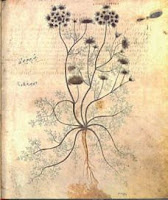 A word about carrots…

In my research for Rogue Knight, I learned that while carrots were an ancient plant in other parts of the world (cultivated in Afghanistan, Iran, and Iraq beginning around the 10th century) and might have existed in Anglo-Saxon England, introduced by the Romans, they would have been thin and woody plants, used mostly for their medicinal properties, not the plump orange carrots we eat today. Ninth and tenth century Viking finds in York, England show carrots, parsnips and turnips, but their vegetables were much more wild than any of our modern varieties. Carrots would not be orange, but white. In fact, early medieval writers often confused them with parsnips, as both plants then appeared similar. The cultivation of carrots in the form we know them didn’t come to England until the 15th century.


The earliest surviving Old English herbals—the Lacnunga and the Leech Book of Bald—are important because they show us the plants available to people in England during the centuries between the departure of the Roman legions in the first century AD and the arrival of the Normans in 1066. The Leech Book mentions carrots many times, but the carrots would likely have been the thin, wild kind, and use for medicinal purposes. Bald prescribed remedies using such carrots for consumption, thick eyelids, smallpox and hiccups. It was also an ingredient of a quieting drink.


In addition to herbs and vegetables, the medieval folks used flowers for cooking, such as violets, primrose and nasturtium, and for medicinal purposes, such as honeysuckle (anti-inflammatory), chrysanthemum (for colds and fever) and poppies (for pain). There were also marygolde plants, later called “Mary’s Gold.”
Monastery Gardens 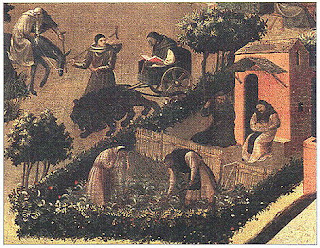 Medieval monasteries also had their own, often extensive, gardens. The monks had to be self-sufficient in supplying their own food, of course, but they also offered medical treatment for the local community using herbs and poultices made from what they grew. Tending the monastic garden was a serious task absorbing much time and energy. Sometimes the monks hired workers to help them. Many monastic gardens also included a fishpond where they would farm their own fish and eels. Industrious, weren't they?
One large difference between gardens of the present and those of the medieval period is that we have some vegetables they did not, including potatoes, pole beans, peppers, pumpkin and tomatoes. Those are new world vegetables, introduced to Europe after 1492.

What do you find surprising about medieval gardens?

Since today is the day Rogue Knight is published, I thought you might like to read the description and an excerpt. You can see the book on Amazon here. 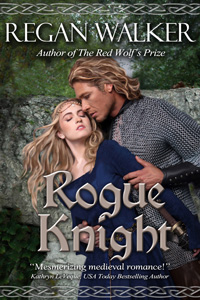 "Mesmerizing medieval romance! A vivid portrayal of love flourishing amidst the turbulence of the years after the Norman Conquest."
-- Kathryn Le Veque, USA Today Bestselling Author

The North of England seethes with discontent under the heavy hand of William the Conqueror, who unleashes his fury on the rebels who dare to defy him. Amid the ensuing devastation, love blooms in the heart of a gallant Norman knight for a Yorkshire widow.

Angry at the cruelty she has witnessed at the Normans’ hands, Emma of York is torn between her loyalty to her noble Danish father, a leader of the rebels, and her growing passion for an honorable French knight.

Loyal to King William, Sir Geoffroi de Tournai has no idea Emma hides a secret that could mean death for him and his fellow knights.

WAR DREW THEM TOGETHER, WAR WOULD TEAR THEM APART

War erupts, tearing asunder the tentative love growing between them, leaving each the enemy of the other. Will Sir Geoffroi, convinced Emma has betrayed him, defy his king to save her?

Dear God.
She crossed herself and covered her mouth, fighting the urge to spew at the sight of so much blood and so many bodies strewn about the clearing, blood congealed on their clothing, their vacant eyes staring into space. Some of the blood had pooled on the ground to catch the rays of the sun. The metallic scent of it, carried by the wind, rose in her nostrils.
At her side, the hound whimpered.
So many.
Until the Normans had come, Yorkshire had been a place of gentle hills, forests and thatched cottages circling a glistening jewel of a city set between two winding rivers. A place of children’s voices at play, some of those voices now silenced forever, for among the bodies lying on the cold ground were mere boys, their corpses cast aside like broken playthings.
At the sound of heavy footfalls on the snow-crusted ground, she jerked her head around, her heart pounding in her chest.
A figure emerged from the trees, so close she could have touched him.
She cringed. A Norman.
A tall giant of a knight, his blood-splattered mail a dull gray in the weak winter sun, ripped off his silvered helm and expelled an oath as he surveyed the dozens of dead. The sword in his hand still dripped the blood of those he had slain. He was no youth this one, at least thirty. His fair appearance made her think of Lucifer, the fallen angel of light. A seasoned warrior of death who has taken many lives.
Had he killed people she knew? Her heart raced as fear rose in her chest.