The twelve days of Christmastide, as celebrated in Georgian England began with Christmas Day (“First Night”) and continued to Twelfth Night, or January 5th, followed by the Feast of the Epiphany in celebration of the Magi arriving in Bethlehem to worship the new King, the Christ child.

In country homes and estates, decorations went up on Christmas Eve and stayed up until Epiphany, the official end of the Yule season, when the greens would be burned in the fireplace.

Twelfth Night has its origins in ancient Rome and was a mid-winter event observing pagan fertility rites, a festival of feasting and public celebration. At some point, this tradition became incorporated into the Christian celebrations and included feasting, drinking, games, plays, dances and masked balls. Shakespeare's play, Twelfth Night, which includes characters disguised as people they are not, was written to be performed on Twelfth Night.

In additional to all the revelry, there was a Twelfth Night cake, an ornate confection into which a bean, a coin or a tiny carved or cast metal version of the Baby Jesus was placed. During early evening, the cake was cut and its pieces distributed to guests who were advised to chew carefully. The person who found the icon then became the king or “Lord of Misrule,” or the Bean King. His Queen Consort or the Queen of Twelfth Night was the woman who found a dried pea in the cake. The king and queen reigned for the evening, no matter their normal status in society.

A 17th century painting by David Teniers the Younger, a Flemish artist titled "Twelfth Night (The King Drinks)," depicts a tavern scene where the common people are making merry, having crowned one of their members as the “king.” 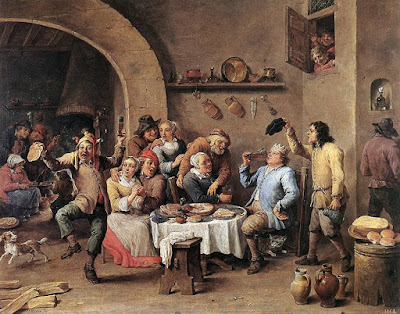 By the late 18th century, the selection of Twelfth Night's "royalty" could also be accomplished by the distribution of paper slips with each piece of cake. The slips were opened and the person holding the one with a special mark inside was declared king.

In Regency England, during Jane Austen’s life time, the celebration of Twelfth Night was at the height its of popularity. Sets of “characters” were available to purchase from enterprising stationers. They were cut up and the slips chosen from a hat, the person having thus chosen having to maintain their  “character” throughout the evening.

Fanny Knight, Edward Austen Knight’s daughter and Jane Austen’s niece, wrote about some of her Twelfth Night Celebrations at Godmersham, the Knight’s country estate in Kent. Here is her report of the 1809 Twelfth Night Party:

Though by Jane Austen’s time the cake was no longer used to assist in the choosing of characters, it was still and important part of the proceedings. The cakes were costly and complicated to make properly and many people, if they could manage to afford them, bought them from confectioners’ shops.

Wassail, the drink of good wishes and holiday cheer, has been associated with Twelfth Night since the 1400s. The ale-based drink seasoned with spices and honey was served in huge bowls, often made of silver or pewter. It was passed among family members and friends with the greeting "Wassail." The name comes from the old English term "Waes hael," meaning "be well." 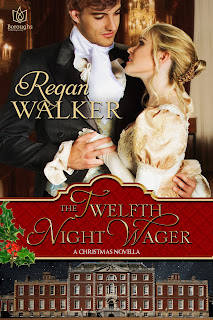 In my Christmas novella, The Twelfth Night Wager, two men at White’s club, one of whom is Viscount Eustace, the "redheaded rake", make a scandalous wager involving a virtuous widow.

The wager, by its terms, must be won or lost by Twelfth Night. The story includes all the fall activities in London and the countryside, as well as the Christmastide celebrations leading up to Twelfth Night.

You can find it on Amazon and read more about it on my website.

"... a tale told with humour and heart; the perfect read for a cold winter's night."  – Good Friends, Good Books


“The Twelfth Night Wager had everything I could ask for. Wonderful romance, likeable characters, and a sweet storyline!"  -- Lily Pond Reads
Posted by Regan Walker at 1:30 AM