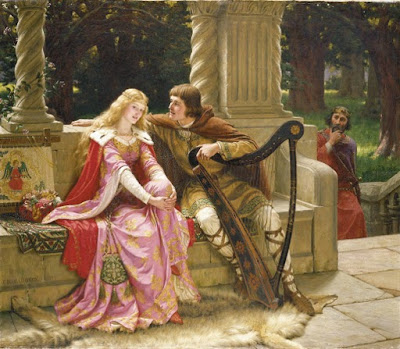 Medieval romance has been around for centuries. The love story of King Arthur, Lancelot and Guinevere, as memorialized in Lancelot, le Chevalier de la Charrette, an Old French poem written in the 12th century, and Wagner's composition of Tristan und Isolde are classics we never tire of. And, many of us read Ivanhoe by Sir Walter Scott, set in 12th century England, when we were in school. It might surprise you to know that romance writing developed in Britain after the Norman Conquest and flourished right through the Middle Ages.

Why do we love to read about that time when knights battled for their king and ladies swooned at their victories? Perhaps it is the notion of chivalry, a valuing of womanhood and virtues such as truth, honor and valor. A knight who rises to duty, and the maiden who would take her place at his side. In Geoffrey Chaucer’s The Canterbury Tales, he describes a knight as being distinguished in truth, honor, generosity and courtesy, who is both wise and modest. A nobility of spirit, not just a nobility of title and lands. 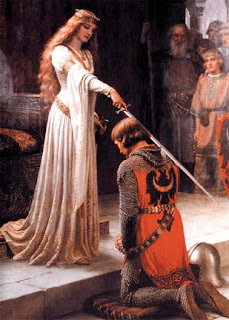 In the eleventh century, knights were the social elite. They were the sons of wealthy landowning families, and they ruled the countryside by force. The knights who followed William to England were often younger sons, hoping to gain lands by their sword.

Knowing of the raping and pillaging that occurred in England after the Conquest, I wondered, what happened to notions of chivalry? So in doing my research for my medieval romance, The Red Wolf’s Prize, one of the things that I wanted to look at was this question.

Since clergy played a part in knighting a man, by blessing his sword, chivalry definitely had religious aspects. However, the clergy required knights to vow to only protect the weak, such as widows, orphans, children, and of course, the church. The hundreds of knights who left Normandy with William in October of 1066 stopped at the church at Dives-sur-Mer, Normandy where they said mass before setting sail to invade England. You can see the list of knights here: http://www.robertsewell.ca/dives.html. If you’ve read The Red Wolf’s Prize, you will recognize some of the names, as they are characters in my story.

Though the Church opposed war in general, it was forced to deal with it, in the end tolerating it, even sanctioning “righteous” wars. Hence, Pope Alexander II gave his blessing and his sanction to William’s invasion of England. But the faith of the knights whose swords the Church blessed did not, in all cases, behave as they should. 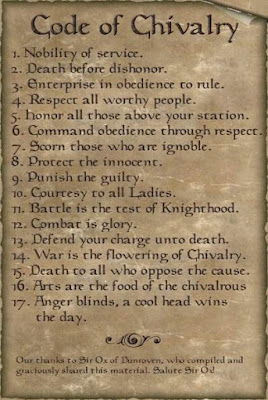 The Code of Chivalry spoke of living one’s life not only to defend Crown and Country but to live in a manner worthy of respect and honor, to protect the innocent and to respect women. However, knights rose in the eyes of their sovereign based on how ruthless and successful they were in battle. Hence, the Red Wolf, the hero in my story, gains a reputation for being invincible while fighting at William’s side. It is not hard to see how such men might be tempted to step over the line and take advantage of the conquered. Many did. Thus, while the knights might pay respect to highborn ladies, not all of them afforded the same respect to servants, peasant women and other men’s wives, especially in the midst of war. A maiden of low birth might fear an armed knight as much or more than another man.

Beginning in the 11th Century, love became an essential part of the Code of Chivalry, expressed in social life, and literature. Knighthood became more than a matter of war and feudal dependence; it became romantic. The tournament was a main part of the lives of knights, and the laws and customs of the tournament were inseparable from the love of ladies. Much of the knight’s leisure time was spent in hunting, and the practice field, but also in music, and exercising gallantry and poetry. The chivalric literature, whether its note was that of love or of deeds of arms, shows that the laws of gallantry were as important as those of military honor.

One can hope that chivalry ultimately encouraged a nobility of spirit. In The Red Wolf’s Prize, for perhaps a different reason, the Red Wolf tolerated no acts of rape among his men, though not all of William the Conqueror’s knights behaved so nobly. 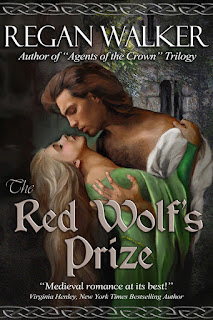 HE WOULD NOT BE DENIED HIS PRIZE

Sir Renaud de Pierrepont, the Norman knight known as the Red Wolf for the beast he slayed with his bare hands, hoped to gain lands with his sword. A year after the Conquest, King William rewards his favored knight with Talisand, the lands of an English thegn slain at Hastings, and orders him to wed Lady Serena, the heiress that goes with them.

SHE WOULD LOVE HIM AGAINST HER WILL

Serena wants nothing to do with the fierce warrior to whom she has been unwillingly given, the knight who may have killed her father. When she learns the Red Wolf is coming to claim her, she dyes her flaxen hair brown and flees, disguised as a servant, determined to one day regain her lands. But her escape goes awry and she is brought back to live among her people, though not unnoticed by the new Norman lord.

Deprived of his promised bride, the Red Wolf turns his attention to the comely servant girl hoping to woo her to his bed. But the wench resists, claiming she hates all Normans.
As the passion between them rises, Serena wonders, can she deny the Norman her body? Or her heart?

Buy on Amazon.
Posted by Regan Walker at 1:00 AM