Privateers in the American Revolutionary War! by Regan Walker

There is something about the idea of privateers that stirs my blood. It has all the excitement and danger of piracy on the high seas, but with a significant difference: the privateers, armed merchant ships, operated with government sanction, “Letters of Marque” that allowed the private vessel to act under color of law.

Privateers were a large part of the total military force at sea during the 17th and 18th centuries. During the Revolutionary War (1775-1783), privateers acting for their respective governments—American, British and French, among others—seized thousands of ships, sometimes the same ship more than once!

Pictured above is the American privateer brig, the General Montgomery, engaged in action with the British merchant vessel, the Millern, which it captured off Ireland in July 1777. The prize was sent to America but later re-captured by the British.

At the time the Colonies declared their independence, the Continental Navy had only 31 ships (that number later increased to 64). But the sea fighting ability of the young country vastly increased as Congress issued Letters of Marque to nearly 1,700 American privateers.

The first privateer in the war might have been the American brig Reprisal, which on November 29, 1776, sailed into the port of Lorient in Brittany with Benjamin Franklin on board and two British prize ships in tow. The British protested, of course, and the owners of the seized vessels sought compensation. Lord Stormont, the British ambassador in Paris called Benjamin Franklin “a dangerous Engine” and voiced his suspicions the American statesman was on some “secret Commission from Congress.” He was.

The French response in allowing the American captain to sell his prizes in France was a tacit recognition of the young country’s independence. Franklin must have been delighted for he was there to solicit French aid.

Responding to the sale of the two prize ships, the Public Advertiser, a London newspaper said,

Is not this acknowledging the American Privateer’s Commission? And is not
that an Acknowledgement of the Independency of America?

Indeed it was, and it would not be the last such acknowledgement. The privateers were crucial to gaining recognition of the legitimacy of America’s war against Britain. 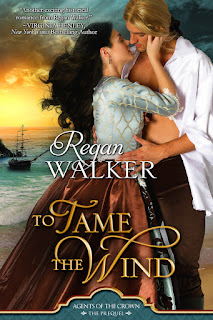 In my novel, To Tame the Wind, the hero, Captain Simon Powell, a British privateer, captures the daughter of a French pirate turned privateer to hold for ransom to regain his seized ship and his crew. Ben Franklin is a character and the one who issued the French captain his Letter of Marque.

In fact, during the war, Franklin issued Letters of Marque to three ships: the Black Prince, the Black Princess, and the Fear Not. During a 15-month period in 1779-1780, these three ships captured 114 prizes. One of the reasons Ben Franklin sought these prizes was to use the captured British crews to ransom American seamen languishing in British prisons.

American privateers captured over 10,000 British seamen, keeping them out of the British Navy. In 1777, George Washington's armies totaled about 11,000 men. At the same time there were 11,000 privateers at sea intercepting British shipping in the Atlantic, Caribbean, and even between Ireland and England. Together, the Continental Navy and privateers captured 16,000 British prisoners, a substantial contribution in comparison with the 15,000 prisoners taken by the entire Continental Army before the surrender at Yorktown.

If you want to be swept away into this era and experience life on a privateer with a handsome British captain, then you just might enjoy To Tame the Wind!

From the 5-star review by Pirates and Privateers:

“Daring sea battles, roguish lurkers, ill-treated prisoners of war and deceitful dandies add dashes of spice to this historical romance, making it one readers will savor long after they turn the last page."

Buy on Amazon.
Posted by Regan Walker at 1:00 AM

Email ThisBlogThis!Share to TwitterShare to FacebookShare to Pinterest
Labels: Pirate/Privateer, Sharing Secrets, To Tame the Wind