Crow’s nests, Tops and Crosstrees… Clearing up the mess 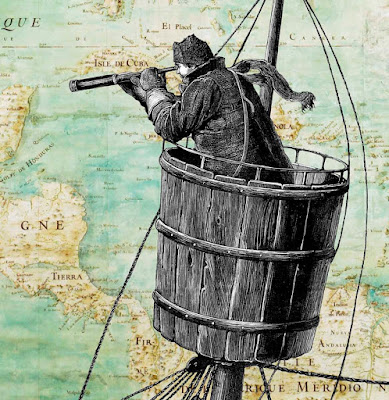 The crow’s nest was not a regular feature on merchant and privateer ships of the 19th century, as some authors would like to think. What they are—or should be referring to—are either “tops” or “crosstrees”, most likely the latter.

The barrel crow's nest was invented in 1807 by the Arctic explorer William Scoresby, Sr. sailing in the Greenland whale fishery. It’s a basket or barrel attached to the mast strictly for the purpose of a lookout with no rigging or shrouds to support. Naval scholars suggest the name was coined because Scoresby's lookout platform resembled a crow's nest in a tree, but there are other, more fanciful ideas around as to where the name came from. In any event, whalers used it to spot whales while protected from inclement weather of the frozen seas. South Pacific whalers didn’t need a basket or barrel to keep the lookout warm so they would stand on a double iron ring high on the main mast.

A platform with a railing around it built at the level of the "doubling" of the mast (where the shrouds of the upper mast attach) is a "top". There were round tops with railings on ships back into antiquity...as far back as there are doublings of the masts. A fighting top is an enlarged top with swivel guns, designed to fire down at the deck of enemy ships. They could also be manned by men armed with muskets or rifles. (Horatio Nelson was killed at the Battle of Trafalgar by a man firing from a fighting top.)

Flat platforms, round platforms, oval platforms, boomerang-shaped platforms, two straight sticks set at right angles...with or without railings—if the shrouds of the upper masts attach to them—they are all "tops."

Crosstrees are the two horizontal spars at the upper ends of the topmasts of sailing ships, used to anchor the shrouds from the topgallant mast. They serve as a base to spread the next level of supporting guy ropes, providing a stable height extension to the masts. Schooners of the 19th century had crosstrees, not crow’s nests or tops.

It doesn't take much to get it right and the story will be more authentic if you do.