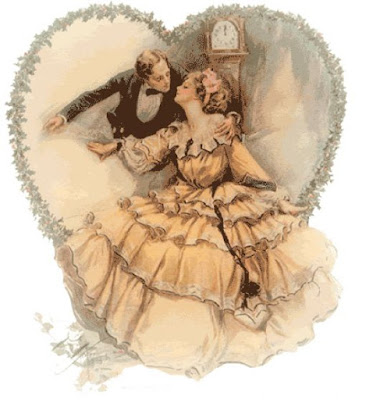 Though St. Valentine’s Day has been celebrated for a very long time, the Valentine’s Day cards we send today, and their romantic precursors with pictures, real lace and ribbons, didn’t really come into fashion until the mid 19th century with the Victorian era.

Valentine cards were cherished because of the sentimentality attached to them. Designing cards became a highly competitive market, with a vast array of motifs and verses. Suddenly, cards were being produced in tens of thousands, from whimsy and slightly vulgar, to truly sentimental, their designs included lace paper, embossed envelopes, glass or metal mirrors, ribbons, dried ferns and fake advertisements, bank notes and marriage licenses. 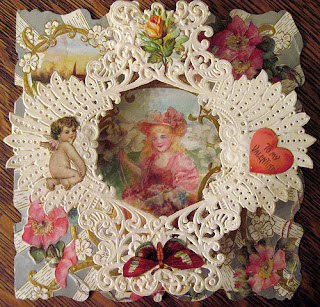 Valentine’s Day cards became a flourishing trade in central London. Commercially printed cards quickly superseded homemade offerings of earlier times. They reached the height of their popularity during the 1870s and 80s. Yet even those commercially produced featured birds with real feathers, posies of dried flowers and spun glass hearts, all trimmed with ribbons and lace.

Some valentines were so thick with embellishments, they came in presentation boxes. Some unfolded like fans, while mechanical valentines had levers or disks which made figures dance, hands move and birds flutter their wings.

Sometimes a scented sachet would be sent rather than a paper Valentine. The one below with silver lace and flowers and a woven silk message in the center dates from the 1870s. 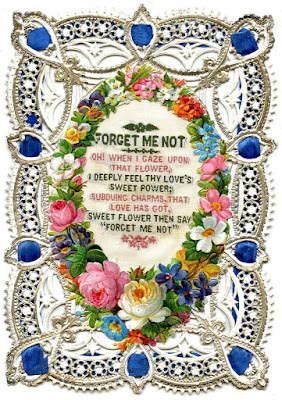 The words in these cards were as effusive as the decorations. Unabashedly sentimental, they pleaded for affection and pledged undying devotion. Even men kept these tokens of affection hidden in their bureau drawers. 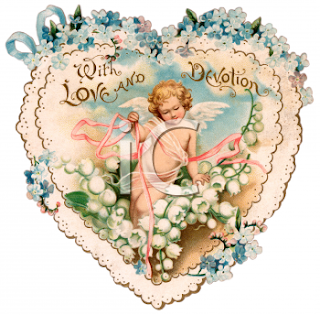 The world has changed and so have valentines but sometimes I like to look at the ones from earlier eras and enjoy the sweet sentimentality expressed. Today our affection is often more subtly expressed but it’s still nice to have a day when such tokens of love can be exchanged.

Happy Valentine’s Day!
Posted by Regan Walker at 7:53 AM