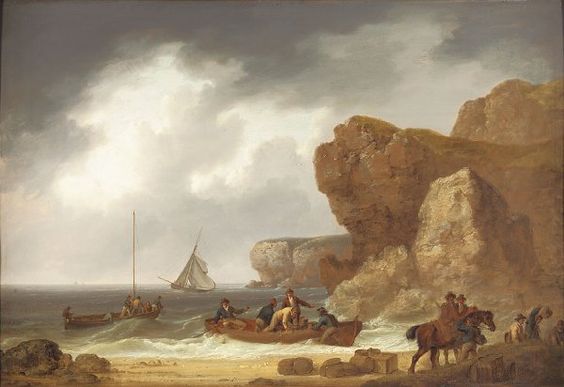 In the course of my research for my Georgian romance, Echo in the Wind, I discovered much about smuggling in England in the 1780s. (The first scene in the story is set off the coast of Bognor, now Bognor Regis, where the hero and heroine meet as smugglers for the first time, neither knowing the other’s true identity.)

By the end of the eighteenth century, smuggling on the south coast of England had escalated to alarming rates. From the prosecutions at the Old Bailey during the 1780s, most of which did not result in a conviction, it appears many communities were more frequently the smugglers’ willing accomplices than their terrorized victims.

By 1784, the date of my story, the large organized smuggling gangs of the mid-century were a thing of the past, however, smuggling remained a widespread business. Out of a population of eight million, it is estimated that as many as twenty thousand people were full-time smugglers with twenty-one million pounds of tea smuggled into Britain each year.

Smuggling was not confined to the poor. Robert Walpole, the country’s first prime minister, used the Admiralty barge to smuggle in wine, lace and other goods. As mentioned in my story, Lady Holdernesse, whose husband was Lord Warden of the Cinque Ports from 1765-1778, used Walmer Castle as a base for her smuggling more than one hundred French silk gowns and fine French furniture.

No wonder the new prime minister, William Pitt, made smuggling one of his top issues.

Even during periods of war, English smugglers brazenly traded with France. Between 1763 and 1783, the number of customs vessels patrolling the coast increased from twenty-two to forty-two. But when one considers the miles of coastline these forty-two boats had to patrol, it is clear that the odds vastly favored the smugglers.


Commander James Ellis, a character in my story, was a real historic figure. Just as I portrayed him, he captained the HMS Orestes hunting smugglers off the Sussex coast.

Women might be involved in smuggling, but it was always from the land side. If they did not sell, transport or hide the smuggled goods, they provided protection, alibis and assistance to those who did. Thus, it is not out of the realm of possibility that my heroine, Lady Joanna West, could be “master of the beach” for the smugglers in Bognor (today called Bognor Regis).

While England's citizens might condone smuggling, they did not sanction violence by smugglers. During the period 1780 to 1800, smugglers tried at the Old Bailey were frequently charged with assaulting officers, punishable by imprisonment, rather than assembling or transporting smuggled goods, punishable by death. However, as in the trial of John Smalley, featured in my story, it was possible to be executed for beating a revenue officer. (The trial is taken from an actual record of the Old Bailey.)


In 1784, firing on a customs vessel after it had identified itself became a felony. However, as a French citizen, my hero, Jean Donet, would not have been subject to being dragged back to England for trial. England was the only country that did not have an agreement with France to trade criminals (what we would call today an extradition treaty). But Jean had cause to worry about Joanna, who was subject to English justice.

Among the most coveted of the smuggled goods was French brandy, cognac even more so. By the 1770s, London, home to the great connoisseurs, had become the largest consumer of the best brandy, creating a demand the smugglers were happy to meet.

In the Cognac region of France, located in the province of Saintonge in 1784, grapes were the most valuable crop. The clay soil was too impoverished for any other. As a result, the clergy and the nobility farmed the land themselves and did not lease it to others.

In the 1780s, cognac became a profitable, prestigious product in demand throughout France and across Western Europe. Even though this was a good time for the region, the peasants still grumbled about tithes paid to priests and taxes to landlords. Their complaints were not without reason given the humble state of their living conditions. By the end of the decade, their unhappy state would lead to the French Revolution.

If you loved the dashing Jean Donet in To Tame the Wind, you are not alone. How could you not love a man who gave up all for the woman he loved? With his aristocratic manners, handsome dark looks and bold, privateer ways, he might be my favorite of all my heroes. When he first appeared on the deck of his ship, la Reine Noire, shouting orders to his men as guns blazed all around him, he quite stole my heart. I knew then he had to have his own story and a second chance at love. I was also aware it would take an unusual woman for Jean Donet to consider loving again. I believe I found her in Lady Joanna West.

I hope you enjoy the story. 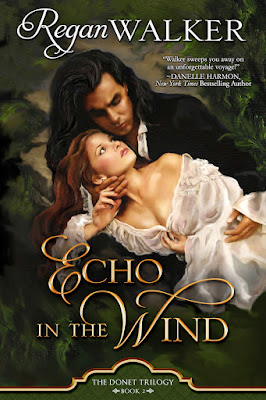 Cast out by his noble father for marrying the woman he loved, Jean Donet took to the sea, becoming a smuggler, delivering French brandy and tea to the south coast of England. When his young wife died, he nearly lost his sanity. In time, he became a pirate and then a privateer, vowing to never again risk his heart.

As Donet’s wealth grew, so grew his fame as a daring ship’s captain, the terror of the English Channel in the American War. When his father and older brother die in a carriage accident in France, Jean becomes the comte de Saintonge, a title he never wanted.

Lady Joanna West cares little for London Society, which considers her its darling. Marriage in the ton is either dull or disastrous. She wants no part of it. To help the poor in Sussex, she joins in their smuggling. Now she is the master of the beach, risking her reputation and her life. One night off the coast of Bognor, Joanna encounters the menacing captain of a smuggling ship, never realizing he is the mysterious comte de Saintonge.

Can Donet resist the English vixen who entices him as no other woman? Will Lady Joanna risk all for an uncertain chance at love in the arms of the dashing Jean Donet?

"Walker sweeps you away to a time and place you'll NEVER want to leave!"
~ NY Times Bestselling author Danelle Harmon

Buy on Amazon US, UK or Canada

Except for the small waves rushing to shore, hissing as they raced over the shingles, Bognor’s coast was eerily bereft of sound. Lady Joanna West hated the disquiet she always experienced before a smuggling run. Tonight, the blood throbbed in her veins with the anxious pounding of her heart, for this time, she would be dealing with a total stranger.
Would he be fair, this new partner in free trade? Or might he be a feared revenue agent in disguise, ready to cinch a hangman’s noose around her slender neck?
The answer lay just offshore, silhouetted against a cobalt blue sky streaked with gold from the setting sun: a black-sided ship, her sails lifted like a lady gathering up her skirts, poised to flee, waited for a signal.
Crouched behind a rock with her younger brother, Joanna hesitated, studying the ship. Eight gun ports marched across the side of the brig, making her wonder at the battles the captain anticipated that he should carry sixteen guns.
She and her men were unarmed. They would be helpless should he decide to cheat them, his barrels full of water instead of brandy, his tea no more than dried weeds.
It had been tried before.
“You are certain Zack speaks for this captain?” she asked Freddie whose dark auburn curls beneath his slouched hat made his boyish face appear younger than his seventeen years. But to one who knew him well, the set of his jaw hinted at the man he would one day become.
“I’ll fetch him,” Freddie said in a hushed tone, “and you can ask him yourself.” He disappeared into the shadows where her men waited beneath the trees.
Zack appeared, squatting beside her, a giant of a man with a scar on the left side of his face from the war. Like the mastiffs that guarded the grounds of her family’s estate, he was big and ugly, fierce with enemies, but gentle with those he was charged to protect.
“Young Frederick here says ye want to know about this ship, m’lady.” At her nod, Zack gazed toward the brig. “He used to come here regular with nary a con nor a cheat. He’s been gone awhile now. I heard he might have worked up some other business—royal business.” He rolled his massive shoulders in a shrug. “In my experience, a tiger don’t change his stripes. He’s a Frog, aye, but I trust the Frenchie’s one of us, a free trader still.”
She took in a deep breath of the salted air blowing onshore and let it out. “Good.” Zack’s assurance had been some comfort but not enough to end her concerns. What royal business? For tonight, she need not know. “Give the signal,” she directed her brother, “but I intend to see for myself if the cargo is what we ordered.”
Without seeking the position, Joanna had become the smugglers’ master of the beach, responsible for getting the cargo ashore and away to inland routes and London markets with no revenue man the wiser. She took seriously her role to assure the villagers got what they paid for. Their survival depended upon it.