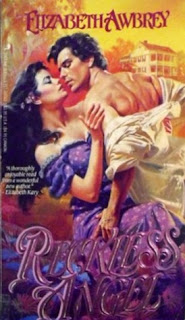 This was Awbrey’s (aka Elizabeth Stuart) first novel, published in 1988, and her only Western. She wrote four more novels (all of them great) before retiring in 1995 to raise a family. All of her novels have garnered 5 stars from me; one won the RITA award.

Set in Texas in the late 1800s, RECKLESS ANGEL tells the story of Katherine (“Kat”) Bennett, an independent beautiful young woman raised by her father, Judge Bennett, a respected rancher. Sent to Philadelphia to become a lady, she returns home years later, anxious to resume her involvement in the family ranch, “Three Creeks,” that will one day be hers. While she was away, her father hired a new ranch hand, now her father’s right arm—a gunslinger named Jason Cain (“Jase”). Jase bears many scars from a tortured past but he’s a fair man and loves Kat’s father, who treats him like a son. When Kat and Jase meet, the chemistry and the conflict are immediate. Kat resents Jase’s place in her father’s heart and she believes Jase has nothing but disdain for her. She is so wrong.

Awbrey is a superb storyteller and weaves in historical information so seamlessly you do not even realize you’ve traveled in mind back to the period she is writing about. Her characters are richly drawn and each one unique. Jase is an interesting man, a strong, tortured hero yes, but also intelligent, charming and endearing. Kat is a girl trying to find her way in a world in which she does not feel at home—neither a lady nor a tomboy, but somewhere in between. What amazed me is that I was totally engrossed in this story and yet I never traveled far from the Three Creeks Ranch and the nearby town. The detail in speech and descriptions is so meticulous you don’t realize how much work went into crafting this tale. Only a master storyteller can do that.

Trust me when I say you won’t regret getting this author’s whole backlist, including this Western historical—novels to curl up with on a rainy day…all keepers!

Here’s the list of novels she wrote as Elizabeth Stuart, save for the first: