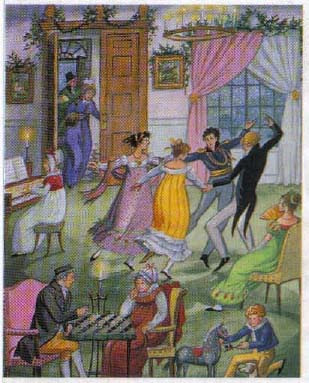 Christmas in Regency England, 1811-1820, the time when Prince George ruled as in his father’s place, was a more subtle celebration than the one we observe today. To my way of thinking, perhaps they were better for it. Christmastide, as they called the season, began with Christmas Eve and continued to Twelfth Night, or January 5th, followed by the Feast of the Epiphany the next day, the official end of the Yule season.

In country homes and estates where Christmas was typically celebrated, decorations went up on Christmas Eve and stayed up until Epiphany when the greens would be burned in the fireplace.

Evergreens were the central part of the decorations, with boughs of holly, ivy, hawthorn, rosemary, and Christmas Rose (hellebore), depending on where you were in England.
Of course, there was also mistletoe, although it grows mostly in the western and southwestern parts of Britain. Friends or relatives in other parts of the country might send you some by the mail coach.

The mistletoe would more likely have been a “kissing bough”—a hanging structure of evergreens, apples, paper flowers, and dolls representing Joseph, Mary, and baby Jesus. Most of the traditions were steeped in the Christian faith. 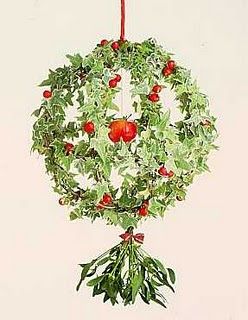 Christmas Eve might also find folks sipping cups of hot wassail (spiced cider) or eggnog as they watched a performance by traveling actors, called “mummers.” The actors would parade the streets and ask at almost every door if the mummers were wanted.

Dressed in the most outrageous fashions with gilt and spangled caps and ribbons of various colors on their bodies, they performed plays, ending with a song, and a collection of coins.

The play these groups performed was often Alexander and the King of Egypt, featured in my story The Holly & The Thistle.


Christmas Day would, typically, begin with a trip to church. Afterward, there would be a grand feast of roast goose, boar’s head (really the head of a pig, as wild boars became extinct in England as of 1185), and perhaps turkey (brought to England from the New World in 1550). Vegetables such as potatoes, squash, Brussels sprouts and carrots were also served, along with stuffing for the fowl.

Wonderful desserts ended the meal, including marchpane (what we call marzipan), and gingerbread. Another favorite dessert was Christmas plum pudding, a mixture of 13 ingredients (representing Christ and the twelve apostles): suet, brown sugar, raisins, currants, citron, lemon and orange peels, spices, crumbs, flour, eggs, milk and brandy. All this was boiled in a pudding cloth. Very tasty. 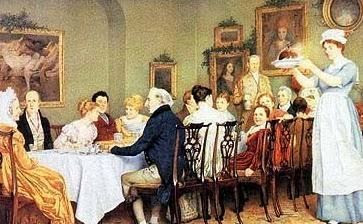 There was always Mince pie, too. While recipes varied by region, ingredients usually included beef, suet, sugar, raisins, lemons, spices, orange peel, goose, tongue, fowls, eggs, apples and brandy. This was also called Twelfth Night Pie because it was originally made with the leftovers of the Christmas dinner. The pies were eaten every day during Christmastide to ensure good luck for the twelve months of the New Year.

Wine would be served with the meal. There would be champagne, burgundy, claret and perhaps a good Madeira. There might also be a homemade Elderberry wine. Folks in Regency England were notorious imbibers of liquor. In addition to wines with dinner, there would be port, brandy and sherry. For the heartier, there was the wassail bowl, which often included sherry or brandy.

After dinner, the men would have their port and cigars and women would retire to the drawing room for tea.

When brought together again, the men and women might sing carols around the piano including Deck the Halls, Here We Come a-Wassailing, and While Shepherds Watched Their Flocks. Joy to the World, though first published by Isaac Watts in 1719, wasn’t in the modern version until 1836. Hark the Harold Angels Sing was first written in 1739 by Charles Wesley and amended in 1753 by George Whitfield. However, Mendelssohn didn’t write the modern version we sing today until 1840. Silent Night was written in 1816 by Joseph Mohr, but wasn’t translated into English until 1863.

Christmas Day was also the day on which a gift or tithe was given to the landowner. It was not a widespread tradition to give each other gifts, though a small toy might be given to children in the family.

The day after Christmas was Boxing Day, on which you gave presents or “boxes” to those who had given you good service during the previous year. It was also a traditional day for fox hunting.

Another Regency Christmas tradition was the Christmas pantomime. The pantomime usually opened in London on Boxing Day. Joseph Grimaldi, the famous clown, who lived from 1779 to 1837, regularly performed at the Drury Lane theatre.

You did not necessarily have to worry about snow near Christmas, despite the story of Good King Wenceslaus. According to several sources, weather in most parts of England was often warm and damp. The winter of 1818, the year in which my stories, The Twelfth Night Wager and The Holly & The Thistle are set, was a particularly warm one. The next winter of 1819-20 when A Secret Scottish Christmas was set was particularly cold, especially in Scotland. But they had a huge Yule log to warm them and good friends to keep them company.
The things that would be missing from Christmas in the Regency would be the Christmas tree and stockings hung by the fire. Christmas trees were a German tradition that while brought to George III’s home by his German wife Charlotte, was not incorporated into the people’s traditions until Queen Victoria’s time.

Christmas in Regency England contained the simple traditions of holly and candles and roaring fires in the hearth, the smell of wassail steaming in a large bowl over the grate, and the pungent aroma of the Christmas pudding and roast goose making the mouth water. Children home from school might add the typical noise to the family gatherings, but the emphasis was on social interaction that is, unfortunately, so often missing in our celebration today.

Among the gentry it was a mostly religious festival marked by a good meal with friends and charity to the poor. In Jane Austen’s Emma, we are told, “At Christmas every body invites their friends about them, and people think little of even the worst weather.”

I do hope you enjoy my Christmas stories set in Regency England and Scotland. May they bring you love and good cheer.

You can find them on Amazon: A Secret Scottish Christmas, The Twelfth Night Wager and The Holly & The Thistle. 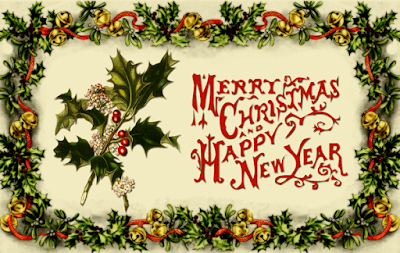