Joanne Major and Sarah Murden’s A Georgian Heroine: The Intriguing Life Of Rachel Charlotte Williams Biggs – A Fascinating Look at one woman’s heroic accomplishments in the Georgian Era 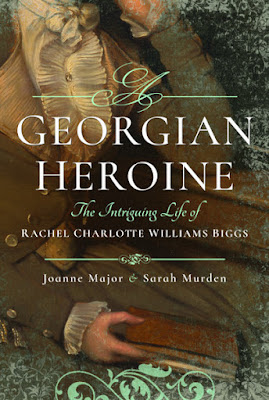 Rachel Charlotte Williams Biggs was an amazing woman, particularly for her time and this is her story as told by two authorities in the Georgian Era. In the authors' words:

Charlotte tantalizes with a glimpse of the passionate and brave woman that lay beneath her carefully cultivated, respectable, almost nondescript demeanor before she once again draws down the veil and shields that side of her character from view.

The story begins in the 1770s in Lambeth on the Thames where the Williams family had relocated from Wales. Charlotte was educated in France. Much of what we know about her is taken from a letter she wrote to the man she had once hoped to wed, General Sir David Ochterlony, a Scot born in Boston who made his name in India as a part of the East India Company’s army. Alas, he quite forgot about Charlotte until she struck up a correspondence with him later in life.

As a young woman, still a teenager, the beautiful Charlotte Williams was abducted, repeatedly raped and held prisoner by a despicable man who was obsessed with her. A man who escaped any punishment, at least in this life. It took Charlotte years to be free of him, but she persisted. Charming, inventive and intelligent, she made friends in high places and dared much to bring her ideas to light. She became a playwright and author, a political pamphleteer, even a spy, working for the British government. At one point, deciding the royal family needed a boost, she single-handedly organized George III’s jubilee celebration.

The record suggests she never married but took the name of a friend who was happy to have the cover of a pretend marriage for the sake of his gay lifestyle.

Trapped in France during the Revolution (1792-95), Charlotte published an anonymous account of her adventures. She was content to give her thoughts to others, allowing politicians to use her ideas and analyses. But as her success became evident and her thoughts ever more valued, she never forgot her true love, a man who abandoned her to pursue his own ambitions, spending his adult life in India, taking Muslim wives and “going native”.

Charlotte was an overcomer and a trailblazer who overcame a bad beginning (bad through no fault of her own) to take risks and cleverly ascertain where society was going. A royalist all through the Revolution, she never doubted that in the end the Bourbons would be restored to the French throne, which they were.

We authors try and cast our heroines as noble women who overcome great odds to lead significant lives and win the hero’s love. Though she never found true love, Charlotte was just such a woman. I could not recommend a more delightful heroine to you than Charlotte. The authors have done a thoroughly researched job of bringing her story to light in a fast-paced narrative. I recommend it!
Posted by Regan Walker at 7:30 AM