Why the Scots Didn't Celebrate Christmas by Regan Walker


It was not until 1958 that Christmas Day became a public holiday in Scotland; Boxing Day followed in 1974.

The most spectacular celebrations of Hogmanay are the fire ceremonies that take place in Stonehaven, south of Aberdeen. Giant fireballs are swung around as they are paraded up and down High Street. The celebration is believed to originate from the Norsemen’s Winter Solstice with the swinging fireballs signifying the power of the sun, purifying the world by consuming evil spirits.

In A Secret Scottish Christmas, my new Christmas Regency romance, Aileen Stephen and her brother and his wife play host to a gaggle of Londoners bent on celebrating Christmastide. And then they go to Stonehaven for Hogmanay.

Spies and Scots and Shipmasters, oh my!
Scotland 1819

Twin brothers Nash and Robbie Powell of Powell & Sons Shipping, London, sail with their fellow Agents of the Crown to Scotland for a secret celebration of Christmastide, a holiday long frowned upon by the Scottish Kirk. But more than Christmas is being kept secret. The two brothers have accepted an assignment from the Home Secretary Lord Sidmouth to ferret out a fugitive fomenting rebellion among the Scots.

Aileen Stephen, the only daughter of an Aberdeen shipbuilder, had to be clever, devious and determined to gain her place in the family business. She succeeded to become a designer of highly coveted ships. One night, a man’s handsome face appears to her in a dream. When two men having that same face arrive on a ship full of Londoners, Ailie wonders what her second sight is telling her. Is the face she saw a portender of the future, a harbinger of danger, or both? And which of the two Englishmen is the one in her dream? 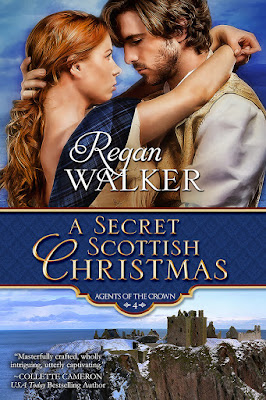 Older than Nash by a mere five minutes, Robbie has always been protective of his twin. When he realizes Nash is attracted to the sister of their Scottish host, he thinks to help matters along. But Nash wants no help from his brother, not where Ailie Stephen is concerned because Robbie is attracted to the girl himself!

Two brothers vie for the affection of the Scottish lass but only one stirs her passion. Which one will it be? And what will she do when she learns they are spies?

Celebrate Christmas and Hogmanay with the Agents of the Crown in A Secret Scottish Christmas!

“Walker stuns with her gift for storytelling, magically entwining historic fact and fiction to create a thought-provoking, sensual romance, one that will stay with you.” – Chicks, Rogues & Scandals

“So, how many are coming?”
Her brother reached for the letter he had set aside. “According to Ormond, their children are spending Christmas with the grandparents. So, in addition to the Ormonds and the dowager countess, all four of the Powell brothers have accepted the invitation, the two who are married bringing their wives. Nine guests in all.”
“Nine?” Her eyebrows rose. “’Tis fortunate you added that wing to the house after you married Emily.” Will had already possessed a grand house on the hill overlooking the shipyard when he took his English bride. In the year that followed, it had become a sprawling estate, complete with an orangery for Emily, whose constitution favored a warmer clime.
Will grinned. “I had to enlarge the house. I did not change the company’s name to William Stephen and Sons to remain childless. Emily and I expect to have many bairns. Come spring, Lord willing, we shall have the first one. Perhaps a braw lad with my auburn hair and brown eyes.”
“Or a lass with Emily’s black hair and thistle-colored eyes,” Ailie teased.
Her brother paused, his face taking on a look of bliss that told her he was thinking about the children he expected to have. “Aye.”
Resisting the temptation to roll her eyes, Ailie said, “Whatever the good Lord gives you, Will, I’m just glad we have the additional bedchambers for our visitors. Has Emily warned our cook?”
He shrugged his broad shoulders. “I believe so. She mentioned something about talking to Martha about the cook Muriel is bringing, but you can ask her at dinner.”
“The countess is bringing her cook?” Ailie envisioned sparks flying in the kitchen as roast goose, boar’s head and turkey replaced salmon, venison and steak pie.
“Emily thought Martha might need help with the English dishes for the Christmas feast.”
“I just hope you ken what you’re about. The Kirk does not abide Yule celebrations.”
Will’s expression took on the look of a determined Scot. “I have loved Christmas since my days at Cambridge and ’tis worth the risk of a frown from the parish minister to make Emily happy.”
“As you wish. Are we still going to Grandfather Ramsay’s for Hogmanay?”
“If the weather allows, aye. A short sail up the coast to Stonehaven could be great fun. Our guests might like to take a sledge through the snow to see the old castle. I’ll ask Grandfather to book the Ship Inn. Now that I think of it, we’ll need all their rooms. Perhaps Father will come from Aberdeen. What do you think?”
“Grandfather might not be pleased with so many Sassenachs descending on him, but he will expect us for Hogmanay. Once Father hears of our plans, he and Mother will be staying put in Aberdeen. Aside from the fact he doesn’t like to travel at this time of year, he’s still riled about what happened in Manchester. The last time I visited him, our uncle had just returned from Glasgow where the mood of the weavers is angry.”
William frowned. “There’s talk in the Arbroath taverns, too.”
That night, after she retired to her bedchamber, Ailie took out her diary, drew her shawl around her and opened a new page. Replacing the candle that had burned to a stub, she dipped the quill in the ink and began.

15 December
I am preparing for a storm (not the current one that has brought so much snow, but one of a different kind). Will says we’re to have guests from London to celebrate Christmas—in secret, of course, else Mr. Gleig, the parish minister, will have something to say about our celebrating a holiday banned by the Kirk for centuries. Bother. Father will be ever so displeased. And, after we sail our guests to Stonehaven for Hogmanay, Grandfather Ramsay might never speak to us again. Oh, did I mention the Countess of Claremont is bringing her English cook? Batten down the hatches.
Posted by Regan Walker at 5:00 AM