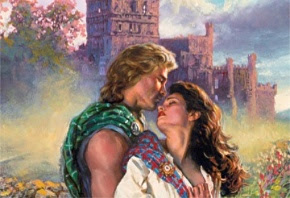 Geddes MacGregor once wrote, “No one in Scotland can escape from the past. It is everywhere, haunting like a ghost." Scotland’s past is the subject of this list, romance novels set in Scotland, most in that magical part of Scotland called the Highlands. Some are romances with a Scottish hero or heroine. All are rated 4 or 5 stars. Enjoy!

I hope you will consider my novels set in Scotland’s past… Rebel Warrior (a medieval) and  A Secret Scottish Christmas (a Regency) and my Regency novella, The Holly & The Thistle.
Posted by Regan Walker at 1:00 AM