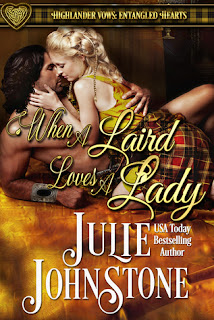 Set in 1357 in Scotland, this is the story of Marion de Lacy, a woman who is half Scot but raised by her English father who paid her little attention. When he attempts to force a marriage upon her to an evil knight, she escapes with the help of her friend, Angus, who wants her to join the MacLeods of Skye. Before she can reach them, she’s captured by the knight.

Iain, laird of the MacLeods was married to a woman he loved. With her death, he wants never to marry again. Yet he’s agreed to marry Marion by order of the English king, Edward, to save the Scottish king, David.

In this well-written story, we meet some delightful characters and see how an arranged marriage can lead to love. Great dialog adds to the characters’ interchanges and there are some exciting scenes.

The hero, Iain, is an unusual man. He apologizes frequently and is unselfish and caring to the woman he was forced to marry, considering her in all he does. Marion is a saint, kind to her enemies and wanting only to win her husband’s love. Iain’s clan mostly accepts her but the sisters of his former wife are not pleased at their laird’s new marriage.

The path to love has many twists and turns, including treachery, betrayal and, for good measure, a seer. And enjoyable Scottish historical read.
Posted by Regan Walker at 2:00 AM