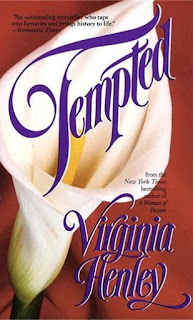 In a complex, lusty tale of feuding Scottish clans during the time of James IV of Scotland and Henry VIII of England, Henley serves up a story that will grab you from the first page and will not let you go. I loved it. Henley has the ability to capture not only the time period, but also the culture of the borderlands between Scotland and England and the difficult but wonderful relationship between two stubborn, courageous people. I highly recommend this one.

Set in Scotland in 1512, this is the story of clans Douglas, Hamilton and Kennedy. Beautiful Valentina Kennedy, the oldest of the Kennedy daughters, was known as Flaming Tina for her glorious red-gold hair and her feisty temper. She was raised with her sister and brothers in Castle Doon in Ayr on the Southwest coast of Scotland where her father ruled as the Lord of Galloway. Tina despaired the lot of women that prevented them from enjoying male pursuits, and she frequently joined her brothers in their activities.

When Tina turns 17, her father insists she say yes to one of her many suitors. Tina thinks to marry the Hamilton heir but is happy when a gypsy tells her there will be no wedding for her this year. In a surprising turn of events, she is handfasted to her enemy, the powerful Black Ram Douglas, who she considers a brute of a man. Tina intends to have her revenge.

Henley develops some wonderful characters, including the ghosts of two star-crossed lovers from the past (another Kennedy and Douglas pairing), who constantly entertain. She paints vivid word pictures of the food, clothing and castles that draw you in and help you experience the times--and she does it all very well. In a fitting climax to the story, she superbly describes the battle between the English and Scots at Flodden where Scotland experienced a terrible defeat.
The second in the 2-book Clan Kennedy Saga is The Border Hostage and I recommend it, too!
Posted by Regan Walker at 2:00 AM