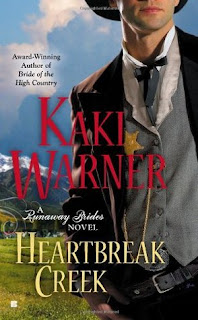 First in the Brides trilogy (Heartbreak Creek, Colorado Dawn and Bride of the High Country), and set in Colorado in 1870, this is the story of Edwina Ladoux, “the once reigning belle of Sycamore Parish” in Louisiana, now a widow, who because of circumstances decides to become a mail order bride to a man described as an “honest, hard-working widower” seeking a “sturdy English-speaking woman” to help with his ranch and 4 children.

Edwina doubted she could be considered “sturdy,” but decided to proceed nonetheless. In her own words, “She might be leaping from the fat into the fire, but at least for that brief moment she hung suspended between the two, she would be totally free.” How could you not like a woman who would take a leap like that? Especially when she drags her older sister, Pru, along with her for this adventure into the unknown. Like several of Warner’s latest novels, this one features a train ride (to Colorado) and names like Damnation Creek—I loved them.

It gets more interesting as we learn that Pru is Edwina’ half sister and her mother was black. Pru is a beautiful, accomplished woman who is self-educated and able to care for both Edwina and herself. Both Pru and Edwina have a past that still affects them. Our hero, Declan Brodie, is a man of few words who is overwhelmed by his sprawling ranch and his four children. He also has a past that haunts him—his first wife left him for another man and Indians killed both.

Edwina thinks of Declan as a “great lump” due to his size. He calls her Miss Priss and then “Ed,” which she likes better. He has agreed to her terms—to give her a few months without consummating the marriage to see if they are compatible. Initially it seems they are not when he learns she can’t cook and she imposes rules on the children that have them bristling, but then Declan begins to admire other things about her. I loved their conversations and sparing. I loved the way Warner had the exasperated man cursing in his mind. She captures the male point of view so well.

Warner plunks you down into the late 19th century American frontier with ranchers, Indians, freed slaves and others trying to build a new life. And we are introduced to the other “brides” in the trilogy so read this them in order.

The dialog is realistic and rich, the characters varied and well drawn and the plot is intriguing and exciting. Spread over all this like chocolate shavings over cake frosting is Warner’s dry wit. Simply delicious.
Posted by Regan Walker at 7:37 AM