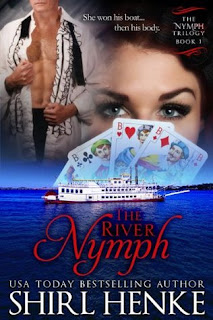 Set in St. Louis and on the Missouri River in 1876, this is the story of Delilah Raymond, a Civil War widow and a formidable gambler who takes Clint Daniels, owner of the River Nymph sternwheeler, in his own game and comes away with his boat! Alas, when Delilah tries to change the gambling boat into a cargo transport, she finds she can’t hire a crew as no one will work for her because she left Clint buck naked (he lost the wager for his clothes). So, Delilah is forced to take the southern lothario (her word) on as a partner. Clint is intrigued by the chestnut-haired beauty with nerves like steel and bewitching green eyes and decides to accept her offer.

And so begins a riverboat adventure up the Missouri River through Indian country to the miners in the Dakotas. This is Henke at her best: wonderfully descriptive, witty dialog, well researched and a sexy. A story of two strong-willed people, both distrusting, but meant for each other. Clint is a southerner with ties to the Sioux Indians. Delilah hates the smug man because she is a northerner who still has scars from the war. But there is more to the sexy blond gambler than Delilah can see.

There is a fair amount of the Plains Indians’ viewpoint in this one, and though not shown, a reference to the folly of Custer. But most of the story is centered on the trade on the river and the hazards of taking a sternwheeler up north. The secondary characters are well drawn (I loved her Uncle Horace!). An entertaining read.

This is the first in the Nymph trilogy: