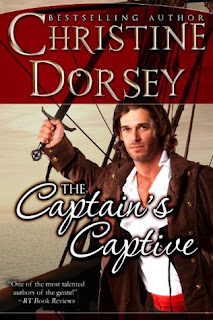 July is American Patriotic month on the blog, that time when I feature romances set during America’s wars up to and including the Civil War. I’m starting with one from the War of 1812, the last war fought with the British.

Set at the beginning of the War of 1812, The Captain’s Captive is the story of Charlotte Winston, a young Englishwoman who lived in her daydreams while caring for her dying mother. When her mother passes on, Charlotte sails from England to Montreal to join her father, a general in the British army who has arranged a marriage for her to Captain Levid of the Royal Navy.
When Charlotte’s ship is fired upon by the American captain Jonathan Knox, the British captain quickly turns over control and Charlotte becomes Jon’s prisoner. Charlotte tells him she is betrothed to Captain Levid. Jon wants to know where he can find the English captain who impressed Jon’s younger brother (impressment was one of the causes of the war). Charlotte has only a vague idea where Levid is, and doesn’t like the man herself, but tells Knox she doesn’t know. Jon doesn’t believe her and decides to keep her in his cabin until she gives him the information he wants.

Initially, I thought the heroine a bit simpering and over theatrical (her voice squeaks and she shuts her eyes when reality is too much for her) and I did get a bit tired of her “fantasy pirate” that supposedly was a twin for the hero. The hero seemed too much of a gentleman. Those impressions changed somewhat as the book progressed, because the characters changed. In the last half of the book, Jon became more "real" and Charlotte acquired a backbone.

To my thinking there was a bit too much introspection and too much sex...the latter seemed to be piled on irrespective of the plot (or any concern for her getting pregnant, I might add). Don’t get me wrong; I like a good love scene, but I don’t need one each time the hero and heroine meet. And why was his family surprised to learn she was British and her father in the Royal Army? After all, she was raised in England (Oxfordshire) and I assume had an accent and other characteristics that gave her away.

There is no question Dorsey can write well and tell a good story. And I admire how she wove in the history and the abuses of the British military along the Chesapeake. Her battle scenes are realistic, and she captured well the terror of the night the British sacked Washington. For all that she gets full marks and a spot on the best list.
Posted by Regan Walker at 1:00 AM