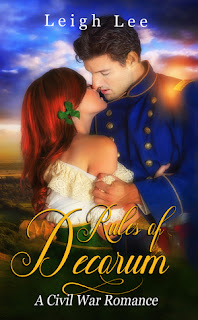 Set in 1863, this is the story of Eugenia Johnson who dons the clothes of a boy and enlists in the Union Army to hide a horrible secret. She becomes a sergeant in the medical corps and does well until a new surgeon shows up.

Captain Jeffery Bradford is a disciplined man who expects the best of his men. And then he discovers one of his “men” is a young woman who turns his disciplined order into chaos. When he learns Eugenia’s secret, he wonders if she isn’t a Confederate spy.

This is a well-written tale featuring the medicine of the Civil War and the hardships faced by the men fighting for the Union, reflecting much research into the era. Several exciting scenes will have you on the edge of your seat. Eugenia and Jeff are great leads and perfect for each other.

A worthy patriotic tale!
Posted by Regan Walker at 2:00 AM