British Spies in France During the French Revolution by Regan Walker 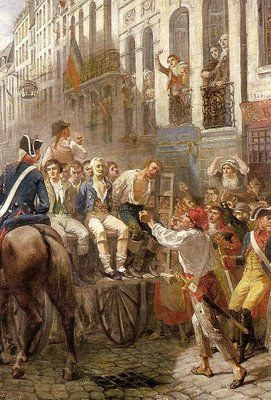 “Are all Englishmen so stupid as to wander into revolutionary France, Mr. West? Or, are you the spy my men believe you to be?” Not giving Freddie an opportunity to reply, he said, “Oui, I think you are un espion anglais, an English spy.”
“Oh, non, bon général,” Freddie protested, “unless you consider Arthur Young’s venture into France to observe agriculture a few years ago to be spying. He did keep a journal in which he wrote of his travels, which you might like to read. I found his musings quite fascinating. My own interest is botany and the plants that grow without human assistance.” Freddie had become familiar with botany for his code work and could have expounded for hours on Brittany’s vegetation.
“Ça suffit!” Rossignol glared at him with suspicious eyes. “Lies and subterfuge!”
Freddie tried to summon an indignant look. “Non, non, je vous assure.” Retaining a placid expression and mimicking the bloody bands of sans culottes he had observed arguing in favor of the revolution, he placed his palm over his heart, “Liberté, Égalité, Fraternité is my motto. I expect one day soon, England will come to see the revolution for what it truly stands for.” To Freddie’s mind that would be a thirst for blood and a disdain for everything true Frenchmen valued.
“Your ruse is entertaining, I give you that, l’Anglais. But already I grow tired of you. Normally, that would mean the guillotine here in Rennes, but it so happens I owe Robespierre a favor of some import. An English spy served up on a silver platter might be just the offering I need to demonstrate my gratitude. Oui, I think you shall go to Paris to answer to him. Should Robespierre decide it best, you can meet Madame Guillotine there before the English-hating citoyens who enjoy a good show.”

[From a conversation between  Frederick West and General Rossignol, Commander of the Army of the Coast of Brest in A Fierce Wind, copyright © 2018 Regan Walker]

Frederick West, the hero in my novel, wasn’t the only British spy in France during the French Revolution. There were many. Paris, of course, was a central target because of the centralization by the revolutionary government. The city became the French center of politics, power, intrigue, commerce and the army. The royalists and the British both established agents there. Money opened the doors to most of the ministries and government institutions, especially if one could pay in hard currency or gold as opposed to the rapidly deflating French assignats.

The most influential group of the period was the Paris Agency. Known as “La Manufacture” and “Les Amis de Paris”, it was created in 1791 by the Spanish ambassador to provide intelligence for the Spanish government. In 1793, the comte d’Antraigues used the information their letters contained to produce his own reports for his master Simon de Las Casas, the Spanish ambassador to Venice, which he also sent to the comte de Provence, who eventually returned to France as Louis XVIII.

The Paris Agency established a direct line of communication with the British government through Jean François Dutheil, the comte d’Artois’s representative in London.


Outside of Paris, agents were located in areas of France that acted as hubs for intelligence networks and channels of communication, such as Lyon and Rouen. In the northwest of France in the Vendée and Brittany, where the Vendéens and Chouans rose in rebellion, British agents acquired intelligence to aid the royalists. Messengers and agents were sent to liaise with allies, undertake fact-finding missions, carry out specific tasks and encourage rebellion.

In A Fierce Wind, Freddie lived on the Isle of Guernsey and worked with Captain Philippe d’Auvergne, Senior Officer of Gunboats on the Isle of Jersey. D’Auvergne's spy network was known as La Correspondance. Working for Evan Nepean, Undersecretary of the Home Office (after 1794, the Undersecretary of War), d’Auvergne landed his agents (including Freddie) on the coast of France in small boats, often at night and in places seldom visited by Republican patrols.

Routes into the interior were arranged and lined with safe houses and trusted locals. Other agents were given more stationary assignments in key places like Brest and St. Malo from which they observed the docks and the comings and goings of ships and provisions. Chouan agents sometimes used trusted local inhabitants to carry messages throughout the region, while others left packages hidden in rocks by the sea to be collected by d’Auvergne’s boats.

Messages were often written in code or in special inks to try and ensure that their contents would not be revealed should they be intercepted. Each intelligence agency had its own ciphers and ink compositions. Some used codes from music. The agents of La Correspondance sometimes used vocabulary borrowed from music, botany, clock making, cooking or tailoring.

As might be expected, the British spying effort was fragmented between various agencies that acted independently of each another. The Admiralty had its own secret intelligence operations, led by Evan Nepean. They used local spies, but also collected information from naval officers and merchant ship captains about sightings of enemy vessels and numbers laid up in port. Hence, Frederick West in A Fierce Wind keeps track of French ships from the deck of La Reine Noire. Even the Prime Minister, William Pitt, had his own private spy network.  How much these groups co-operated is difficult to tell.  What seems to be true is that influential people like Nepean managed to tap many intelligence sources, not just those under their direct authority.
I hope you enjoy my fictional account of a British spy and the French girl he loves as they confront the dangers in revolutionary France.

“A thrilling, edge of your seat page-turner crackling with romance and danger.”
– Chicks, Rogues & Scandals 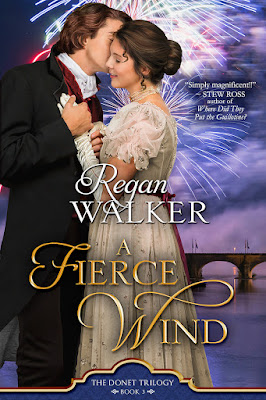 
Zoé Ariane Donet was in love with love until she met the commander of the royalist army fighting the revolutionaries tearing apart France. When the dashing young general is killed, she joins the royalist cause, rescuing émigrés fleeing France.

One man watches over her: Frederick West, the brother of an English earl, who has known Zoé since she was a precocious ten-year-old child. At sixteen, she promised great beauty, the flower of French womanhood about to bloom. Now, four years later, as Robespierre’s Terror seizes France by the throat, Zoé has become a beautiful temptress Freddie vows to protect with his life.

See the book on Amazon US, UK & Canada. And see the other books in The Donet Trilogy.