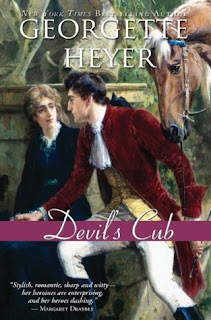 This might be a Georgian set romance (late 18th century) as there is much talk of wigs and powdered hair. It’s the story of Dominic Alistair, Marquis of Vidal, the “Devil’s Cub” and a rake and seducer, good with sword and pistols and happy to duel. As the handsome and wealthy heir to a dukedom, he is still a coveted prospect on the marriage market. Vidal currently has his eye on the lovely and vacuous Sophia Challoner, thinking to sweep her away to France and make her his mistress.

When Sophia’s sister, the straight-laced, brown-haired Mary Challoner, discovers his intent and her sister’s willing participation, Mary intervenes to deceive them both and take her sister’s place. When Dominic discovers the ruse, he is very angry and decides to take Mary to France instead, instantly ruining her. Soon, he discovers this sister is not like the other and her intelligence, calm demeanor and courage win his admiration and, eventually, his heart. He insists on marrying her but Mary will have none of it.

Like many of Heyer’s romances, it is rich in characters who love to talk. The descriptions might be few and the dialog sometimes overwhelming with many Regency-era words that you’ll not recognize. But the tale will draw you in and you’ll want to see how a man like Dominic can win the heart of Mary who is determined to avoid him. But Dominic has his charm and his rough ways are winning.

Note: Dominic is the son of the Duke of Avon from Heyer’s earlier novel, These Old Shades, and the Duke and Duchess of Avon are characters in this book.