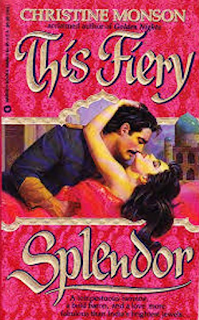 Christine Monson always does thorough research into the historical settings of her books and then serves up a great story. Such is This Fiery Splendor.

Annalise Devon was the daughter of a missionary to China where she was raised until her mother died. Then her father took her to India. It was there in that beautiful, mysterious land that she met and fell in love with Col. Derek Clavell, a wealthy aristocrat and an officer in the East India Company army. When her father suddenly dies, 17-year-old Annalise is made Derek’s ward by her father’s wishes. Then Derek is severely wounded in a battle at the Khyber Pass and must return to England.

In England, Annalise and Derek become lovers yet she knows he will never be hers. Not only does he have a beautiful fiancé, but he has just become his father’s heir to the title. She is just the poor daughter of a missionary. So she returns to India and finds a man who loves her…

Monson gives us some very exciting scenes as Derek pursues the woman he loves and he and Annalise are caught up in the Indian Rebellion of 1857, depicting the horror of the battles where civilians were killed along with the British and Sepoys. And in the midst of it, Derek’s fiancé shows up.

All the history is here, rich in detail. Great characters, well drawn and meaningful dialog. And more angst than you could want. You'll have to find it used but it's worth it. Highly recommended.
Posted by Regan Walker at 6:29 AM