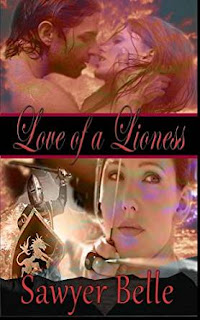 Set in Brittany and England (and the waters in between) in 1343, in the time when King Philip ruled France and King Edward III ruled England, this is the story of Isabeau de Ardres of Brittany, 18, who was raised by her father to take care of herself. However, that didn’t stop one villainous knight, Sir Antoine Beauchart, from raping her when she was 15. Beauchart has now betrayed her father who had pledged his fealty to England to assure an independent Brittany. Left alone, Isabeau is saved by Sir Guy Dampierre, the Bastard of Flanders, who takes her to England thinking she is the widow of Lord Clisson.

Isabeau lives for revenge on Beauchart. With King Edward’s blessing, she becomes the pirate known as the Lioness of Brittany, sailing the English Channel, preying on the French. Her two ships, one captained by Sir Guy, attack at night, painted black with red sails. Sir Guy is drawn to Isabeau’s courage and her determination to succeed. He knows she hides a secret and has vowed to learn the truth.

Sawyer has done well bringing to life a period when England and France were grudging allies, when a real “Lioness of Brittany” roamed the English Channel. And she has brought us an independent, unusual heroine—a willing pirate to bring a villain low. Both Isabeau and Sir Guy bear scars from their past and both must trust to find happiness with each other.

If you like lots of action and sword fights and battles galore, including those aboard ship, you’ll find it in this romance.
Posted by Regan Walker at 3:32 PM