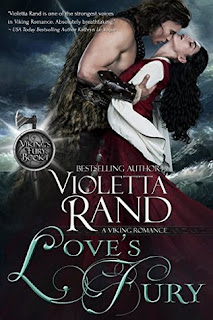 Set in 867, beginning in York, this is the story of Konal the Red, a Norseman drafted by the Danish prince to fight in Northumbria. Once his military contract expires, Konal intends to return to Norway and his family. But his conquests have earned him lands and he wants to see them first The prince has also given him one of the captives, an educated girl named Silvia, to be his slave.

Silvia, the educated daughter of the church undersecretary, vows to avenge her father’s death in the raid that lost her their home, however, she has little choice but to follow Konal as he leads her away from York.

Silvia constantly challenges Konal, all the while being weak to his kisses. Konal is a most unusual Northman, allowing her to do as she wants, believing he can woo her to his bed.

This is a well-written story in the true Viking romance tradition of a powerful Norseman taking an alluring Saxon to be his slave, never intending to keep her in such a position. Can Silvia leave her home forever? The two clash as they find romance.
Posted by Regan Walker at 1:00 AM