Alexandra Ripley’s SCARLETT – If You Only Saw the Movie…you must read this sequel to Gone With The Wind. It’s a great love story, much of it set in Ireland! 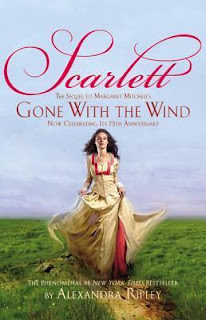 March is Irish historical romance month when we feature all those stories with Irish heroes and heroines and stories set in Ireland. I’m starting with a good one.  A keeper!

For much of the 823 pages, the story is told through Scarlett’s perspective. Though Scarlett shows great kindness to others and pursues Rhett because she genuinely loves him, her motives are often misunderstood and others, who are quick to judge. Society snubs her and Rhett is cold, even cruel. His only aim is to get out of the marriage, describing her as a drug that will destroy him. (It was easy to see Clark Gable saying those lines.)

The book is a treasure, a keeper. I recommend it!
Posted by Regan Walker at 10:00 AM