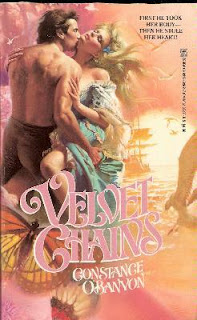 Set during the American Revolution, 1779-1781, this tells the story of Lady Season Chatsworth, a young English beauty who fakes a tumble in the hay with the stable boy on their English estate to avoid a dreaded arranged marriage. Her reputation in tatters, her father the duke sends her away to America to marry her cousin, Sir Edmund Kensworthy, captain of His Majesty’s Guards in New York. But her reputation as a loose woman, false though it may be, has followed her to the Colonies.

Both Edmund and his handsome friend Lucas Carrington, to whom Season is immediately attracted, assume she is free with her favors, much to her chagrin. Meanwhile, there is an American privateer called “the Raven” terrorizing the British and winning the praise of the patriots.

This is a great story of a worthy heroine who is constantly faced with the foibles of men who underestimate her. She put up with so much one could only wonder at the wisdom of a 19-year-old girl. When she is captured by the Raven and held for exchange of an American prisoner, the adventure begins and Season finds herself in love with the masked man who takes her innocence.

O’Banyon vividly portrays the emotions of the Colonists with the British living among them. Our hero is a spy as well as a privateer and I loved that! This is one that will hold your interest. And though I might not have wanted to wait until the very end for Season to learn The Truth, I cannot deny I was absorbed enough to hang in there.

A few nits: With her careful attention to historical details, it was surprising O’Banyon got the forms of address wrong for the British nobility. If her father was the Duke of Chatsworth, their surname would not be “Chatsworth,” and she would not be “Lady Chatsworth” (that would have been her mother); she would be “Lady Season (surname).” Also, I just have to say that naming your daughter “Season” in England at that time (when “Season” referred to the London social season) would be like naming an American girl “Cotillion.” Seemed bizarre and it distracted. But these were minor in the scheme of the whole story.

This is a bodice-ripper, a privateer tale and an American patriotic romance. And it’s a keeper.
Posted by Regan Walker at 1:00 AM