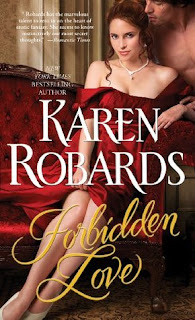 Seduced by her guardian, Justin, Earl of Weston, at his estate in Ireland when she was 17, Megan Kindead is made to pay the price. And oh, how she pays. Though Justin was very aware his behavior was despicable, he “couldn’t help himself” and ruined her just the same. In return, the young innocent fell in love. Of course, he forgot to tell her one thing: he could not marry her as he was already married. Finding she is pregnant, Megan knows to give her child a name, she must wed and soon.
Megan is a high-spirited young woman with courage and convictions. I loved her. Justin was an otherwise honorable nobleman who was obsessed with his ward. He would have her no matter the consequences, even making her his whore when he could not make her his wife.

It’s a bodice ripper, oh yes, it is, and a very good one. Originally published in 1983 (the original cover which has so much more emotion), it is just as good today. The emotions are at times subtle, at times violent, but in all, believable. And the tension is non-stop. Robards is simply a master of this sort of romance and I count myself among her many fans. She always tells a great story.

This book grabbed my attention and would not let me go. Though no date is given it seemed to be roughly set in the Regency era, and while there were some errors in forms of address and clothing color choices (a mauve “coming out” gown when it would have been white, and reference to a white wedding gown when it would have been a color), the story still gets full marks from me because these errors did not distract from what was a well-written, captivating story.
Posted by Regan Walker at 1:00 AM