Kathleen Woodiwiss’ THE WOLF AND THE DOVE – Medieval Romance That Grabs Your Heart! 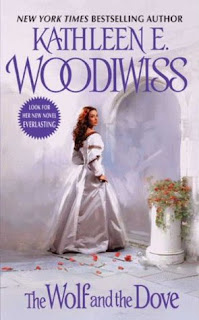 This is a classic by Kathleen Woodiwiss, one of her best. It’s also a bodice ripper so be prepared.

It begins in 1066 just after William the Conqueror has claimed England. One of his most trusted knights and a bastard like William, Wulfgar ("the Iron Wolf of Normandy") is sent to hold Darkenwald for his sire. But arriving a day before, one of the Wolf's knights, Ragnor, who unlike his superior, is of noble Norman blood, takes the castle and delivers a harsh message to the people, one the Wolf would not have sanctioned. This results in the death of the Darkenwald's lord and many of his serfs. Ragnor also claims the fair Saxon princess, Aislinn, lady of Darkenwald, who hates him for the murder of her father, his brutal attack and all he has taken from her.

When the Wolf arrives, he gives Aislinn a choice between him or Ragnor. Hating Ragnor, she chooses the Wolf though, in truth, she hates them both. The Wolf hates women for his mother's betrayal and treats them all as casual property. And that is the way he begins with Aislinn. Wulfgar rapes her and makes her his whore (Aislinn's word). But the proud, beautiful and selfless Aislinn remains the fair lady caring for her people. He warns Aislinn not to love him as he will leave her. But Aislinn is a new breed of woman he's never encountered before and soon she is under his skin.

This is a grand tale of a tumultuous time in history with deception, treachery and jealousy woven into a tapestry of wonderful characters. There are jousts, sword fights, battles and more. Who could not desire the handsome Wulfgar? Who could not come under the spell of the beautiful saint-like Aislinn? Ah...it is timeless!
Posted by Regan Walker at 1:00 AM