Ellie St. Clair’s QUEST OF HONOR – Female Pirate Steals the Heart of a Captain in the Royal Navy! 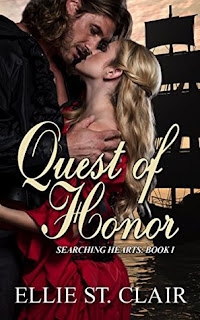 February is Pirate, Privateer and Love on the High Seas month! So, prepare for adventure. First up is one that has it all. Set in 1813, this is the story of Eleanor Adams, who was raised on a ship sailing the high seas with her father, a gentleman pirate who doles out money to the poor. Her desire is to one day assume command of the ship. But her desire might be is thwarted by Royal Navy Captain Thomas Harrington, second son of the Duke of Ware, who has been searching for the pirate Captain Adams for years.

Thomas joined the Navy to escape from his life in society and his father’s plans. Instead, he finds himself combing the seas for Adams. Thinking he might be in Port Royal, Thomas sails there. While in a tavern port, a beautiful blonde offers herself to him and then disappears. When he awakes, he has no idea he’s been sleeping with the daughter of the pirate he hunts.

It’s an interesting story with some clever twists and some good dialog. However, you don’t see much of the ship or many characters from the crews. And no battle scenes. (I understand the author is updating the book to correct the ship terminology.) We are told Captain Adams and his daughter are pirates but we never saw any piracy. As the romance goes, we have a woman of apparent easy virtue (for her times) and a nobleman in the Royal Navy, a duke’s son, who can’t get her out of his mind. A great set up for an intriguing story.
“Regan Walker is an excellent reviewer. Doesn't pull any punches but praises good work. I trust her.”
SHIRLEE BUSBEE, NY Times Bestselling author