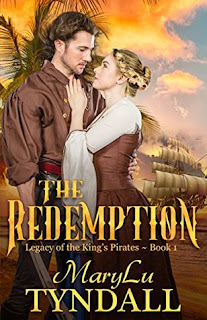 Set in 1665, this is the story of Charlisse Bristol, who leaves England for the Caribbean, looking for a father she has never known. She thinks him a gentleman but she will be oh, so wrong. Before she gets to Port Royal, she is shipwrecked on an island where she is saved by a band of pirates led by Captain Merrick, a Christian and a privateer for the Crown.

Charlisse is both attracted to and confused by the pirate captain. When she tells him of her search to find her father, Merrick agrees to help even though the man is a horrible pirate, the ruthless Edward the Terror Merrick once served under.

There’s lots of adventure in this one with battles at sea and on ship. Tyndall’s descriptions are vivid and the pirate fights realistic. Charlisse seems a bit clueless at times but then she is an innocent. Lucky for her, Merrick is a gentleman in disguise, who tries to keep his band of pirates together while holding to his higher standards and assuring Charlisse’s safety. Her father is, initially at least, a blackguard.

You’ll be glad when they finally dock at Port Royal but the tension doesn’t end there as Charlisse becomes entangled in her father’s world and discovers a kind man of God in Thomas. For inspirational romance lovers who long for a pirate story, this is a great choice!
“Regan Walker is an excellent reviewer. Doesn't pull any punches but praises good work. I trust her.”
SHIRLEE BUSBEE, NY Times Bestselling author