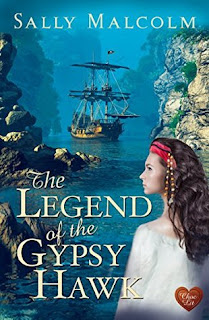 Originally published in 2012 as Beyond The Far Horizon, this is a tale of pirates trying to preserve their dying way of life.

The story begins in 1848 when a midshipman, hauls aboard a chest with a lock carved with a dolphin and a hawk and realizes it must be from the ghost ship the Gypsy Hawk, captained by Zachary Hazard who loved Amelia Dauphin in the prior century. So unfolds the story.

In 1716 off the coast of Africa, there is a pirate haven called Ile Sainte Anne, an island kingdom of pirates that has existed for some time. There the pirates see themselves as freedom-loving people and justify their robbing wealthy merchant ships with a sort of Robin Hood philosophy. Still, for all that, they are pirates.

Capt. Zach Hazard likes women, dice and rum. His father is one of the island’s leaders and protector of “the Articles”—the written pirate’s code. Years ago, Zach left the island after a fight with his father. Now he returns to warn the islanders, Amelia included, that the English, French and Dutch are coming to destroy their way of life.

Amelia is the captain of one of her father’s pirate ships (though we don’t really see her acting as such) and is smitten with the handsome Zach as he is with her. But Amelia sees him as a risky choice and to save her island, she agrees to marry a Frenchman named Luc who persuades the leaders that trade with their enemies is the way to go.

Noble Zach tries and fails to persuade the island to leave behind the past and run. He is betrayed by treacherous Luc, which Zach expected, and by naïve Amelia, which Zach did not expect. Malcolm portrayed the betrayal very well in an exciting, cliff-hanging scene at the end of “Part 1”. Years later, Amelia is to be hanged. Will Zach save her?

This is a well-written tale of adventure, betrayal, treachery and love with a little melancholy thrown in and a bit slow in the middle. Malcolm brings you into the 18th century in a fictional exotic setting with superb descriptions and well-nuanced emotional scenes. Zack is a splendid hero, hurt by his love for a woman who did not appreciate his character. And Amelia is a rather tainted heroine (the word adultery comes to mind).

If you love adventure stories set in exotic locales with a hero to die for and don’t mind a tainted heroine and the pirates’ morality, then you’ll like this one.

A few minor notes: There are no crow’s nests on ships of this period and no “ceilings” but the shipboard scenes are nevertheless very good.
“Regan Walker is an excellent reviewer. Doesn't pull any punches but praises good work. I trust her.”
SHIRLEE BUSBEE, NY Times Bestselling author