Amy J. Fetzer’s THE IRISH ENCHANTRESS – Delightful Story of an Irish Princess Gifted with Magic and an English Knight 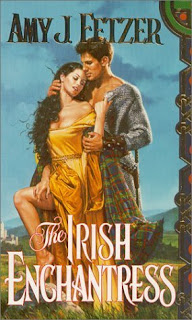 Set in Ireland’s deep past, this is the story of Fionna O'Donnel, a sorceress from a line of magick women, who was banished from her home in Atrium for ten years because she betrayed her father’s wishes concerning an arranged marriage. Her home, GleannTaise Castle, has been taken over by English knight Sir Raymond DeClare at the English king’s command. All around the castle the land is laid waste under a curse.

Fionna once save DeClare’s life and she knows he holds the key to her people’s destiny, if not her own. Raymond must safeguard GleannTaise and take an Irish bride of noble birth. He is wildly attracted to Fiona and knows nothing of her parentage.

It’s a good story, well-told (albeit with some head hopping that will jar the reader at times). There is treachery, betrayal, the Irish trying to live under English rule and even fairies! I’ve read all three in the trilogy and loved them.