Jennifer Blake’s THE STORM AND THE SPLENDOR – Captivating Adventure with a Mysterious Ship’s Captain Sailing From New Orleans to London to Algiers! 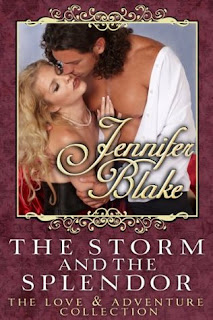 Set in 1818, three years after the Battle of Waterloo, this is a sweeping saga that begins as a group of Napoleon loyalists in New Orleans plot to free the former emperor from his captivity on St. Helena. Well-educated and independent Julia Marie Dupre, a beautiful French Creole, is deeply involved, her father being one of the conspirators.

Joining the group is a handsome English sea captain, Captain Rudyard Thorpe, who looks down on Julia as a mere woman. He says he’s in it for the money, and offers his ship the Sea Jade to assist in the daring attempt to free the former emperor, but Julia doesn’t trust him. By her father’s bidding, and her own desire, she and her father will accompany the Sea Jade on its mission. Soon, however, she is alone and far from home. Left with no other option, Julia must become Rudyard's bride or abandon the undertaking.

Many adventures befall them including treachery at sea as they travel to London and onto St. Helena and then toward Rio. A wild storm at sea results in Rud and Julia being captured by pirates. Julia, deceived by the man she was forced to trust, ends up in the harem of the dey of Algiers where dangerous games are played and her wisdom will be tested. Rud becomes a privateer for the dey’s nephew, a contender for the next dey.