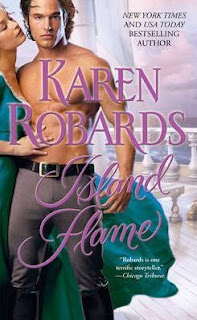 It’s Classics & Bodice Rippers month! Did you know some of the very best historical romances are bodice rippers? Yes, they are, as you’ll see from my best list I’ll post later this month.

You cannot beat Robards for an exciting read. And this one and its sequel SEA FIRE are bodice rippers, to be sure. Every now and then, an arrogant alpha male (in this case a sea captain) can be cathartic, reminding us that all historical romance heroes are not nice guys. This one certainly wasn’t. The heroine starts out as a 17-year-old innocent brat, but she quickly grows up and actually develops a very mature outlook. She may take longer than some to get there, but eventually, she sees the light.

Set in 1842, this is the story of Lady Catherine Aldley, whose father sent her on a military ship to London from Lisbon where he was an ambassador, never knowing it is a silver transport ship and bate for an American pirate named Jonathan Hale, who thinks nothing of ruining an innocent wellborn lady half his age to have his pleasure. Cathy may be young and innocent but she is not tame. When Captain Hale captures her and sets out to tame her in a most brutal way, he has no idea that he will become her victim.

Say what you will about the old romances that don’t reflect 21st-century sensibilities, but I can tell you this: this story kept me reading hours past my bedtime and that, folks, is a well-told tale. The pacing is fast, the action never ceasing and the chemistry between the two is compelling. Great sexual tension.

Modern historical romance authors can learn much from Robards. She makes some masterful twists and turns, I must say. All believable, which counts for much in my book. However, there was definitely some Stockholm syndrome going on as Cathy came to see herself at fault (“she had brought her injuries on herself”), and the captain as heroic. Yes, he saved her from a band of nasty thieves and murderers in Cadiz, but she never would have been exposed to them in the first place if he hadn’t taken her captive.

I also thought Robards did a great job with the ship setting and the sailor/ship jargon, bringing to life the ship’s culture. You might take that for granted, but having done that work for my novel, Wind Raven, I know it required much work on her part. Her descriptions put you in the setting, trust me. If you love a good bodice ripper…this is a great one!
“Regan Walker is an excellent reviewer. Doesn't pull any punches but praises good work. I trust her.”
SHIRLEE BUSBEE, NY Times Bestselling author