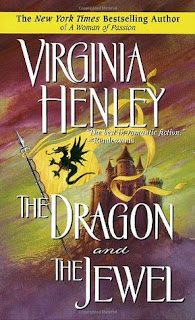 A classic that is well worth the re-read. Virginia Henley is one of my very favorite authors and she masterfully delivers with this one. In her own words: “The story of Simon and Eleanor is one of the great love stories of the thirteenth century,”—a tale of two passionate people and the historical events that swirled around them.

Many women never find one true love; Eleanor Plantagenet was blessed with two, though one, William Marshall, was much older and perhaps more a father figure. The book is divided into those two love stories and each is well told and very precious. Much of this is actual history and Henley weaves fictional romance in so wonderfully, you’d never know it wasn’t fact.

This is the second in Henley's Plantagenet trilogy (The Falcon and the Flower, The Dragon and the Jewel and The Marriage Prize). When King John died, his oldest son, though still young, became King Henry III. Henry had a brother, Richard of Cornwall, and a sister, Eleanor. This is the story of the three siblings, and particularly Princess Eleanor and her second husband, Simon de Montfort, the Earl of Leicester.

When she is nine, Eleanor is wed to William Marshal, 2nd Earl of Pembroke (the son of the great William Marshal and equally as honorable). Eleanor has loved and admired William her whole life. The fact he is 30 years her senior is not a negative for her. William wants to wait to take her as a wife in truth until she is 16. Meanwhile, King Henry takes as his queen an impoverished and ambitious French Provençal, also named Eleanor, who is jealous of the king's sister and thinks to diminish her.

Others are plotting the demise of William Marshall for his influence with the king. On the night William would finally claim his bride, he suffers an attack and suddenly dies. Poison is suspected. Eleanor is devastated at his death, and in front of the clergy takes a vow of chastity and perpetual widowhood. A year later, the great War Lord, Simon de Montfort, enters her life. Once he sees her, he decides he must have her.

There is no question Henley knows how to write historical romance. (She is one my mentors!) Her story reflects the weak king that was Henry III and the constant fights he had with his nobles who were concerned he was allowing England to be run by foreigners and unworthy men. Henley’s attention to detail in dress, food and the environment is meticulous. She is so good I simply devoured this novel. Like her others, this is a complex, well-written, lusty tale with splendid characters, a strong feisty heroine, a drool worthy hero (two of them!) and an interesting plot. You won't be disappointed, I promise.

The Plantagenet trilogy (in chronological order):