Elizabeth Stuart’s HEARTSTORM – A Classic and a Keeper Love Story set in Scotland! 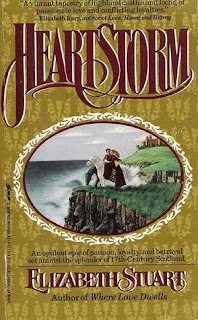 Set in late 17th century Scotland during the reign of King James II, it tells the story of Anne Randall, the beautiful daughter of Robert Randall, the evil earl of Glenkennon and representative of King James' government in Scotland. Randall has come to the Highlands to subdue the clans, and particularly Sir Francis MacLean, laird of the MacLean clan. When Randall uses treachery to imprison friends of the MacLean, the Scottish laird captures Randall's daughter to hold her for exchange of the prisoners.

Anne was on her way from England to join her father upon the death of her mother, who was a MacDonnell, allies of the MacLeans. But Francis sweeps Anne away to his home, Camereigh Castle, on the coast of Western Scotland, where they find themselves drawn to each other and Anne experiences the joy of a warm family.

This is superb historical romance and storytelling at its best. Stuart captivates from the first page as she weaves an intriguing tale of love and treachery in the Highlands. The rich historic details show considerable research. The dialog draws you in and the characters are well-drawn. The hero is drool-worthy.

I promise it will keep you turning pages.

As far as I can tell, Stuart only wrote five books before setting aside her writing career to raise her family. But those she has given us are worth holding dear.