Jennifer Roberson’s LADY OF THE GLEN – Superb Storytelling and a Keeper—a Highland Love that Survives the Massacre of Glencoe! 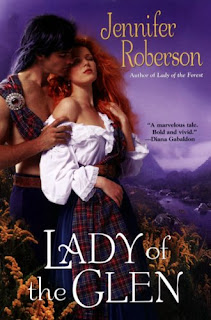 May is Scottish Historicals month on Historical Romance Review and I’m starting with one that is also a classic keeper. It's on my Top 20 list. Simply superb!

Roberson's Lady of the Glen has everything I love in a Scottish historical romance: an epic love story, a noble hero, a strong heroine, real history (the massacre of Glencoe), attention to detail and enough suspense and drama to keep me turning pages. And a wonderful hero and heroine. Even the music of the Highlands is included. I could hear the pipes and their mournful sound as Roberson described them.

The story begins in 1682 when Catriona (“Cat”) Campbell first encounters Alasdair (“Dair”) Og MacDonald. She is an awkward, uncomely girl raised like one of her brothers by her drunken father, but Dair pays her a compliment when no one else does, telling her that she has “bonnie eyes…all bluey-green and bright. The sort of eyes a Highlander likes to come home to.” How could Cat ever forget him after that? Not even though he is one of the dreaded MacDonalds, the enemies of clan Campbell, could she fail to harbor a tenderness for him.

Much happens in this intricately woven tale that spans a decade. It’s the time when King James was exiled to France and William and Mary ruled England. The Scots battle each other as much as the English. Grey John Campbell, Earl of Breadalbane seeks to be the power behind the throne and he thinks it is William who will sit on that throne. He exerts his influence to unite the clans, pretending to support King Jamie, while planning on serving the Highland clans up on a silver platter to William. The clans don’t trust him but the lairds have little choice, seeing the English Ft. William erected as a symbol of the English dominance.

Famous battles like Killiecrankie are vividly described as Dair fights with the MacDonalds of Glencoe and the Stewarts of Appin. Both the MacDonalds and the Campbells kill each other’s young men caught reeving cattle, and Dair saves Cat from harm, and she saves his life. All this while another woman shares Dair’s bed. Then Cat’s father agrees to wed her to the Earl of Breadalbane’s son, Duncan Campbell in exchange for money to pay his many debts.

Perhaps the most intense moment is the Massacre of Glencoe when the Campbells, joined with the treachery of the English, including the king, murder nearly the entire clan of MacDonalds without provocation. Still remembered to this day, the massacre of Glencoe was a great perfidy on the part of the Campbells and England. A very sad chapter in Scotland’s history. As Roberson says of Glencoe, “’Tis a glen of sorrows, an empty place of blood and broken stone, of charred timber and burial cairns.”

I did not want to put this one down. The author truly captured the heart of the Highlands and the characters she vividly portrays bring to life one of the most incredible periods of Scotland’s history.

If you love Scotland and real Highlander romance—the deep ones—you will love this book! It does have a happy ending, too.