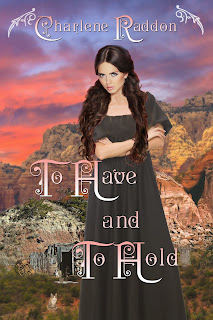 Set in Utah in 1888, this is the story of Tempest Whitney, a widow struggling to survive on her small ranch, Hearts-ease, with her two small children, Angel and Ethan. One day, into her life comes Buck Maddox, who made a promise to Tempest’s dying husband, that he would take care of her. And to seal the deal, her husband deeded Buck half the ranch. But there is another, less honorable man who is scheming to trap her into marriage using her debts to him to gain both her and the ranch.

This is a story of two wounded souls who fight their growing love for each other but finally come together to forge a new life and a family. Raddon portrays the Utah frontier and living in a sod house with great realism (including rats, centipedes and a cow on the roof). The two children, Angel and the toddler Ethan, are adorable and do much to convince Buck he cannot leave as he first intended. Tempest likes to cuss but somehow her sweet daughter has not picked it up.

Buck is a rogue and a gunman but also an honorable man who has suffered. Tempest, having been married to a weak man and having to care for her alcoholic father, wants desperately to be able to stand on her own—until she meets Buck.