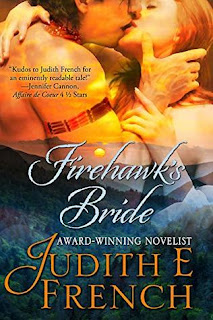 He was only 7 years old in 1600 when John Fire Hawk, grandson of the great Powhattan, was deemed the Chosen One by his Cherokee medicine man on Assateague Island. Twenty years later, in England, having become an indentured servant to an Englishman, he saves Katherine Miles, a squire’s daughter, from a pack of ravenous dogs. And in some mysterious way he knows she will one day be his wife.

Forced into a betrothal she doesn’t want with Robert, the man to whom Hawk is bound, Kate flees the wedding. But the betrothal stands and she accompanies her sister Alice to the new world where both Robert and Hawk now live. As the Indians plot war against the settlers, Hawk determines to save the woman he loves.

Great storytelling with well-drawn characters and rich historical detail provide a worthy tale of life in early Virginia and the Cherokee’s view of the beautiful wilderness. It’s a story of two cultures clashing, and it’s an unusual love story between a noble Indian prince who would defy his people to have the white woman he wanted. I loved John Fire Hawk and his stalwart love for Kate.

Judith French can always be counted upon for a wonderful, well-told story, and this one does not disappoint.
“Regan Walker is an excellent reviewer. Doesn't pull any punches but praises good work. I trust her.”
SHIRLEE BUSBEE, NY Times Bestselling author