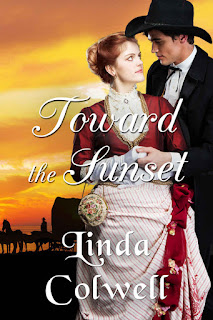 No date is given but since this concerns a wagon train leaving out of Independence, Missouri for the California gold fields, we know it’s the last half of the 19th century. It’s the story of Tara Muldoon and a “fancy man” named Chase Summers, who stole the map to a gold mine her Uncle Roscoe gave her. But then Roscoe also gave the same map to his niece, Jade. The two women end up on the same wagon train heading to California along with the fancy man.

Just to complicate things, Tara has a secret in her past: she was the madam of Trixie’s Pleasure Palace, a virgin until she fell for Chase. On her trip to California, Tara brings the piano player and two of her “working” girls.

The author clearly did much research for the book as the story contains many historical details of the wagon train experience to include snake bite, Indian attacks, disease and the snow of the Sierra Madre mountains. And, while all that is going on, the two women are falling in love yet unable to do anything about it as Jade married Chase just before the train left as the wagon master wouldn’t allow a woman to travel alone and Chase needed to work for his passage.

It’s a great story, well-told, though the book could use some copyediting.
“Regan Walker is an excellent reviewer. Doesn't pull any punches but praises good work. I trust her.”
SHIRLEE BUSBEE, NY Times Bestselling author