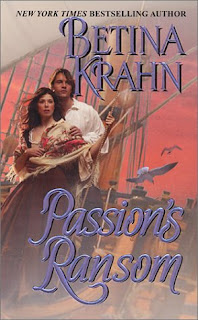 This is a “keeper” that blends the period of the American Revolution and the pirate/privateer culture. Krahn weaves a compelling, absorbing tale with great emotion, a rich layering of endearing characters, meaningful introspection, a believable plot, detailed historical elements and subtle humor.

Set in 1768 (prologue) and then ten years later in 1778, this is the story of Gabriel Prescott, a baron’s younger son who was playing the smuggler, rebelling against both his father and England’s taxation, when the pirate Bastian Cane captures Gabriel and forces him into the scoundrel’s services.

Ten years later, the two are partnered and our hero has become the pirate captain Raider Prescott. Hoping to find a northern market for their goods, they sail to Philadelphia where Bastian captures Blythe Woolrich. He expects her to be the daughter of a wealthy merchant and is planning to hold her for ransom. Unhappily, he discovers she comes with no money.

Raider calls Blythe “Wool-witch” for her headstrong nature, but in reality, she is a young, virtuous woman who has been carrying the heavy load of responsibility for her somewhat bizarre family. Soon Raider and his crew find her irresistible and the very responsible Blythe finds herself falling in love with the pirate captain.

Krahn has created a wonderful pirate crew…not terribly debauched like a certain band who appear in the story, but still genuinely salty dogs of the era with unique quirks.

One of my favorite lines from the book, spoken by Raider to Blythe when she regrets having to leave the island where they shared their love: “Everything worth having can be carried in your heart.”