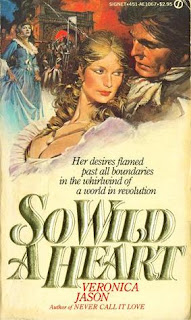 August is Exotic Locales month and I’m starting with a classic from 1981 set in France (mostly) in 1788 and the years following on the dawn of the French Revolution. It’s also a bodice ripper of sorts—and very good.

When she was 18 and working in the fields with her half brother, Englishman Sir Richard Lansing, visiting the duke, rode hard through the fields chasing a stag and shoved Angelique’s brother to the ground. A short while later, Angelique’s brother was dead. Seeking revenge, her father attacks one of the duke’s relatives and ends up being hanged for his crime. Her mother was so dazed with grief she was never again herself.

Forced to seek employment, Angelique runs to Paris and there encounters the man she detests. She wants justice but does something very stupid and ends up raped by Lansing, though under circumstances that might exonerate him somewhat.

Angelique goes through many adventures, not all of them pleasant, but all is not lost for she is still a duke’s granddaughter. But she will make another stupid decision that sees her forced to marry Lansing and move to England.

Meanwhile, she has the memory of a kind man, Jacques Latour, who was all that Angelique admired—courageous, idealistic and unselfish. Though she did not share his passion, she willingly she gave herself to this gallant revolutionary. But that was before Lansing…

Jason has obviously done her historical homework. The story is rich in details of the time and you do get a sense for what the people of France, ordinary people as well as the nobility, lived through. I recommend it, particularly if you are interested in the period.
“Regan Walker is an excellent reviewer. Doesn't pull any punches but praises good work. I trust her.”
SHIRLEE BUSBEE, NY Times Bestselling author