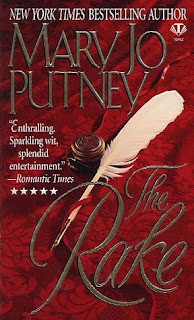 September is Georgian and Regency month on Historical Romance Review and I’m starting with a good one by Mary Jo Putney.

The Rake, set in 1817, is the story of Lady Alys Weston, who fled the shallow affections of her fiancé because he only wanted her money, to become a governess and then an estate manager. She excels at her work and hides her sex from her absentee landlord while making him money. But when the Strickland estate is given to Reginald Davenport, the disinherited alcoholic—a rake all of London is aware of—Alys knows she is in trouble.

Reggie means to reform and Alys is his inspiration, running his estate well. But alcoholism is something that has him by the throat and it will take much to see him on the other side. Reggie is attracted to the tall brunette “the Amazon” his friend calls her) but he will not ruin his employee.

Meanwhile, Alys is the heir to a dukedom—a duchess in her own right—and the distant cousin who will inherit in her absence wants her dead.

Putney takes her time to develop the story and the addiction that Reggie struggles with, all of it reflecting much research and a sensitivity to anyone who struggles with such an addiction. An honorable man who is throwing away his life, Reggie realizes he has one chance to reform and he takes it. Estate life and the Regency after the war with Napoleon are displayed well. Lots of detail makes it a rich story.
“Regan Walker is an excellent reviewer. Doesn't pull any punches but praises good work. I trust her.”
SHIRLEE BUSBEE, NY Times Bestselling author